SOS 78 dogs Bosnia There are 0 kg missing to succeed

This campaign succeeded, it has been delivered on the 27/07/2021, discover the delivery pictures.

Animal Webaction visited the site 09 July 2021 and confirms the situation described below.

1. In Bosnia, Samira is running out of kibble to feed the 78 dogs at her shelter. Unless someone intervenes, they will starve! 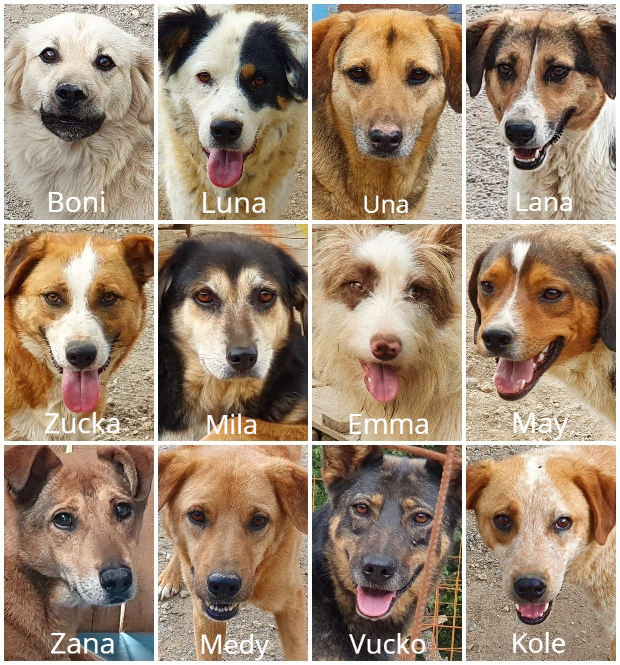 "The situation is really bad, there are more and more dogs on the streets. I do my best to save them and provide them with what they need, but I don't have enough resources... I currently have 78 dogs at the shelter, and they are already not eating enough...

The dogs should be fed twice a day, but I have had to cut back on their portions since the start of the pandemic, and at this point I only have food until the 20th of July...

It is very hard to express what I feel... It is a constant worry and pressure. I don't have enough kibble to feed the dogs, and releasing them back onto the street is not an option since the dogcatchers will take them and euthanise each and every one of them... They depend on me, and I need help to keep them fed."

2. The dogs at the shelter have already started fighting due to hunger. Without kibble, fights and illnesses will only become worse... 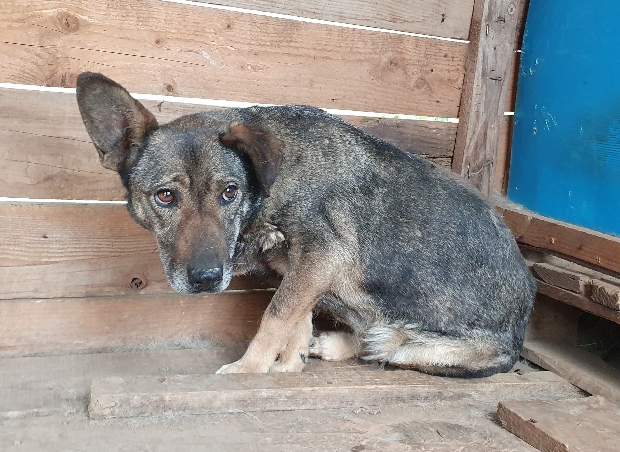 "I can already see the consequences of the lack of food, the dogs are nervous and they fight more. I hear a lot more barking during the night than usual. I am afraid and not sure what to do with them, and how to solve their nervous behaviour, my options to separate the dogs from each other are limited...

If I don't find more kibble soon, I worry that they will become more aggressive and start fighting even more, they might attack one another. That would be bad for everyone.

I am also worried that their immunity system will suffer... Some dogs are already sick, and all of them came here because they were vulnerable in the first place. Ultimately, a lack of kibble may lead to more fights, more sickness, and even death."

3. Abused, beaten, and sick, Leo was going to be euthanised in the local pound. Rescued by Samira, his health is now at risk due to the lack of kibble. 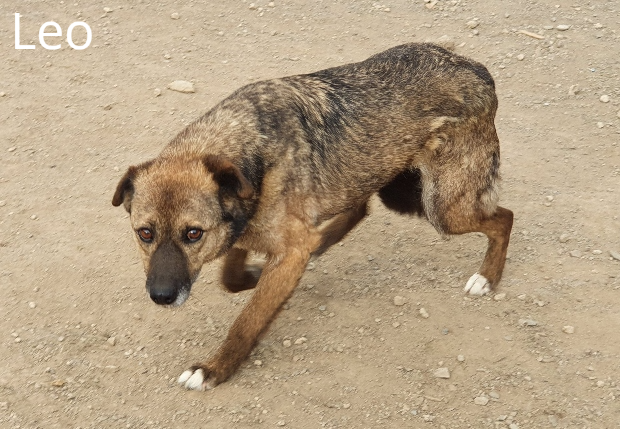 "Leo is a four-year-old male that I rescued from the pound, where he was going to be euthanised. He had been living on the street, where he was abused by people. They tied him up and dragged him, they beat him. Eventually they called the dogcatchers to come and get him.

When I rescued him, he was traumatized and he had lost all his hair due to hunger and flea infestation. He was under so much stress and tension that he could not even open his jaw... It took a long time before he could relax a little.

Today, he is still very frightened and withdrawn. It is fine as long as there is food, but when the other dogs become aggressive due to lack of kibble, Leo is unable to stand his ground. I am the only one who can approach him, and it is essential that I can feed him kibble..."

4. Donations have dropped drastically since the pandemic, while the food pressure and veterinary bills are on the rise... This leaves Samira without any money to buy kibble. 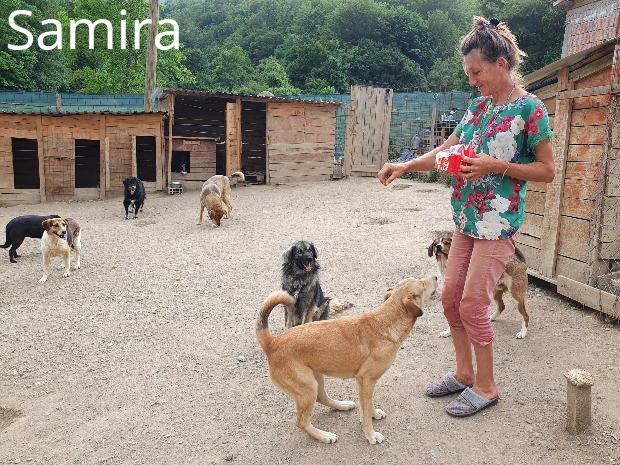 "The donations I am able to collect are not enough to keep the shelter functioning.  Before the pandemic, there were more donors, people were more likely to donate when I put a post up asking for help. But now, a lot of people are left with no jobs... of course this affects the donations.

I don't have any personal money, I put everything I have into the shelter. I already have debts to the veterinary clinic, and more bills are coming up... Vaccinations, emergencies, treatment against parasites... Only last week, I took in four dogs that were very sick and needed treatment. It never stops.

The need for food is also constant. On top of that, we are going through a particularly difficult period now, as our water supply has been cut off due to a drought. I have to carry water from about 500-600 m away three times a day. It is a hard life. I cannot cope with all these issues on my own, and without funds."

5. Samira is not asking for money, but for kibble to keep her dogs from starving. 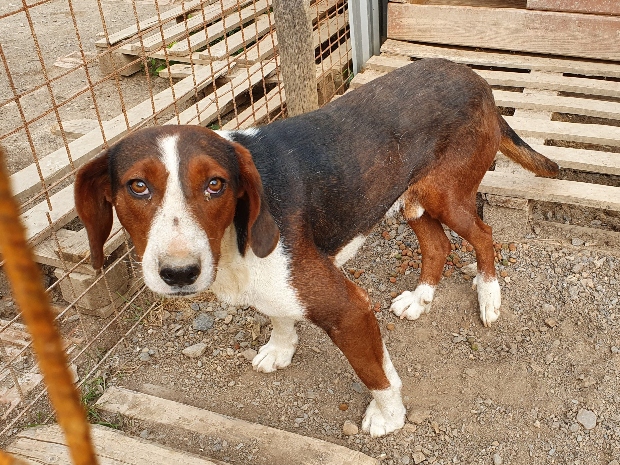 "I started helping dogs officially after I had a chance to see the local kill shelter for myself, and I noticed that there were more and more dogs on the streets. I left my old life and my job in Sarajevo to open a shelter and give these dogs a home, security, and healing.

Every adoption makes me happy, it makes me feel as if I've accomplished something. Since the last campaign, we found homes abroad for 12 dogs. Adoptions have come to a halt now again though, and there are always more dogs in distress. I fear for the abandoned animals out there...

When I take in dogs from the street, I don't only save them, but I make the streets safer too, since there are less starved and aggressive dogs wandering around. I need help from people so that I can continue rescuing as many dogs as possible from the street."

6. If this campaign succeeds, Samira will not receive any money but 1920 kg of kibble, delivered from Animal Webaction's logistic platform in Bosnia.

Animal Webaction has a logistic platform in Bosnia which allows us to intervene quickly and deliver kibble.

7. Samira and her supporters do what they can to raise funds, but it is not enough to keep up with the bills. She urgently needs this campaign to succeed.

"No other organizations that I've contacted can help me. They all give similar answers, they are already helping someone else and don't have enough resources. There is no local help either.

I constantly post updates and calls for help on Facebook. We have a dedicated page for the shelter, and I have someone who helps me manage it and organize fundraisers. Most of the time it is to pay specific bills. People do help, but there are always new bills and we don't raise enough to keep on top of them all.

I try and will keep trying to find options, but there are many other associations and people who are in a similar situation and look for help. Unfortunately, the pandemic has damaged us a lot. We are in a critical situation." 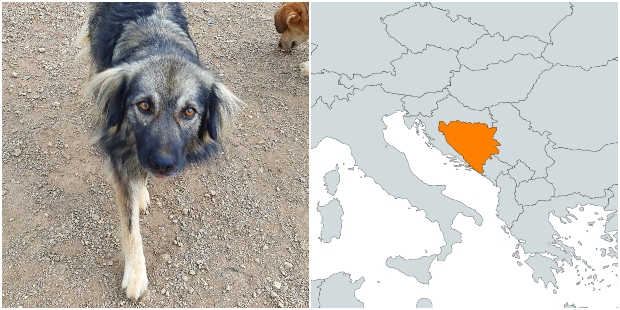 If you know of a foundation or NGO that could help Samira, please invite them to contact us so that we can put them in touch with each other.

If you represent a foundation or an NGO for animal protection, please help Samira's dogs, contact us and we will put you in touch!

If you want to come to Samira's shelter to help her, or if you want to send her kibble or a check directly, contact her via Facebook (note: direct help is done on your own responsibility).

10. If you make a purchase on Animal Webaction, it will be protected by our guarantees

Here is your quiz Grace

Here is your quiz Picking

Picking's copper level is too high: if it keeps on increasing, he could die!