Julie There are 0 cans missing to succeed

This campaign succeeded, it has been delivered on the 26/10/2021, the association will send us the delivery pictures soon. 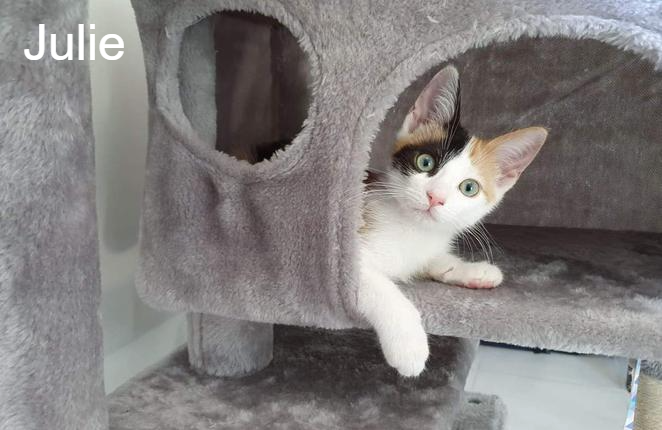 Plagued by disease and parasites, poor Julie is exhausted and suffers from severe stunting...

1. She was found without her mother...

Julie is a 2 months old kitten, that we found with her brothers a week ago, in a field near a farm. The poor things were just weaned and had been left without their mother to look after them!

Julie must have been starved for a few days before we found her, as she is very poorly. She is two months old, but looks twice as young!

When we found her, Julie was full of fleas and had coryza. Her eyes are running, her nose is blocked and she scratches a lot.

So we give her a flea treatment, antibiotics and clean her eyes regularly, to help her get better.

4. Canned food would help her catch up on her growth

With protein-rich canned food specially designed for kittens, Julie could regain her strength. She would gain weight and catch up on her growth.

5. We are facing a wave of abandonment!

We haven't been able to collect food in stores for a while because of the health crisis. Despite this current lack of resources, the association still had to collect many kittens.

There have been a lot of abandonments this summer: during the containements, people have adopted animals, which they have abandoned during the holidays... This represents many more mouths to feed for us, but we do not have the means!

Here is your quiz Minnie

Abandoned by her owner, poor Minnie had to give birth in a barn!

Here is your quiz Quintin

Tired, Quintin was going to be sent to the slaughterhouse!