This campaign succeeded, it has been delivered on the 11/05/2022, the association will send us the delivery pictures soon.

Animal Webaction visited the site 29 April 2022 and confirms the situation described below.

1. In Romania, Nicoleta is running out of kibble to feed the 275 dogs at the pound: they will starve if no one intervenes! 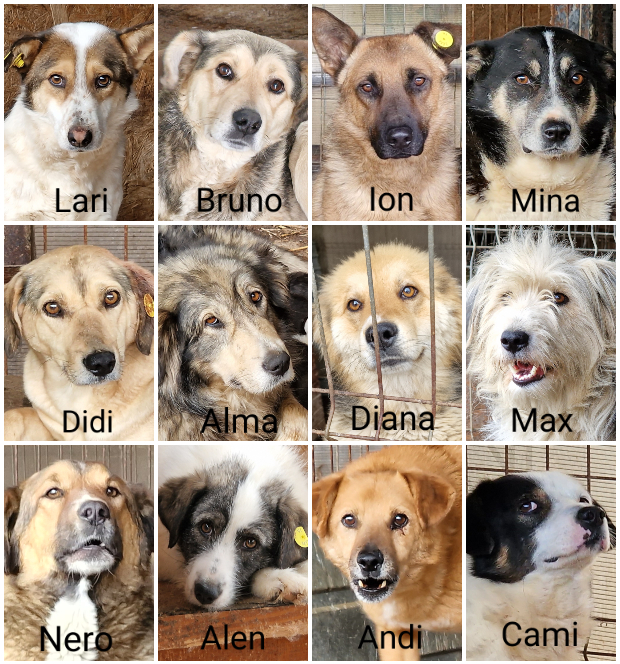 "Since the pandemic and the beginning of the war in Ukraine, there are more and more dogs at the pound: families can no longer afford to live as they used to, they abandon their unsterilised animals on the street, they multiply and end up at the pound. For the same reason, we are witnessing a decrease in the number of adoptions, and the result is clear: we have to take care of many more dogs, while still having low incomes and fewer and fewer donations! As a result, the dogs are eating less than they used to, even though they would need to eat much more than a domestic dog, given their living conditions in the pound!

The problem is that when the dogs arrive at the pound, they are sick, injured, weak, or have serious infections... So we have to treat them, and that means huge veterinary costs! We are in debt to the clinics, we can't afford to buy enough kibble for the 275 dogs in the pound... They have been rationed for over a month and we only have 2 days of kibble left!

I am very sad about this situation, I feel desperate and powerless! Our only option is to rely on donations which, unfortunately, are becoming increasingly rare... I'm afraid the dogs will starve, this kibble campaign is our last hope to save them!"

2. The dogs have not been eating enough for several weeks, if Nicoleta does not find kibble soon, fights and diseases will get worse and worse: the situation will get out of control! 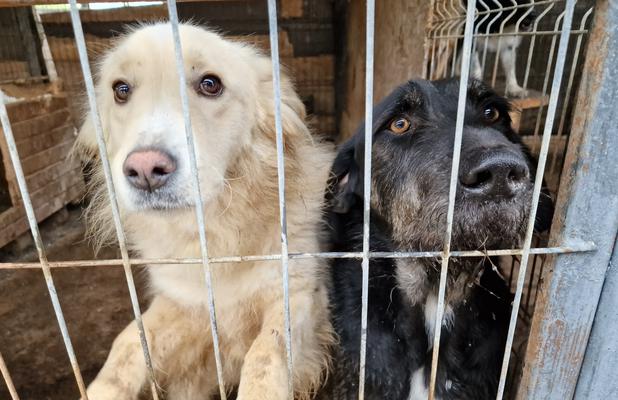 "The living conditions at the pound are bad: the boxes are overcrowded and we don't have enough volunteers to clean their spaces properly... So the dogs are forced to live in dirty pens, they are constantly in danger of catching a disease: being underfed only makes it worse...

We are also very afraid of fights because when the dogs are hungry they tend to become aggressive and nervous. Since we started rationing them a few weeks ago, we have already noticed that they are more agitated, they growl at each other and start biting... When we give them the small amount of little kibble we have left, they fight to eat it!

If this continues, the dogs will kill each other or die of a disease, because their immune systems will be too weak to fight the many infections and diseases that are circulating in the pound's boxes... We are very worried about the health of the dogs, I hope this campaign succeeds, the dogs desperately need to eat!"

3. Poor Dudu is getting weaker by the minute, if the lack of food continues, he will die... 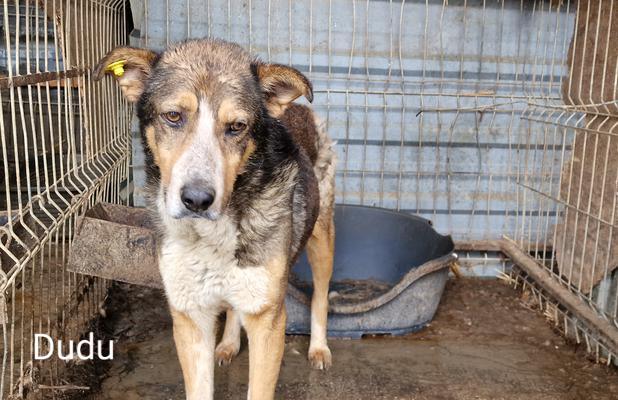 "Like many dogs when they arrive at the pound, Dudu was abandoned in the street by his owners because he was too old, even though he is only 8 years old... Dudu is very weak, he is hungry and this is noticeable because he is more and more aggressive towards his fellow dogs. He stays isolated and does not approach other dogs, it breaks my heart to see him so unhappy... He has already lost weight, I'm afraid he won't survive on an empty stomach, he needs to eat kibble for the chance to find a loving family!"

4. Nicoleta and Florentina, the only two volunteers at the pound, are overwhelmed by debts and no longer receive donations: they cannot buy kibble anymore. 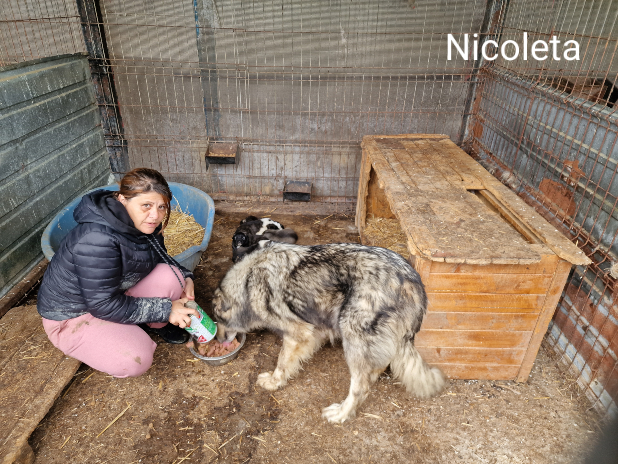 "Florentina and I are the only two volunteers looking after the dogs at the Valcea pound. As the municipality provides us with too little food, we have to pay for three quarters of the dogs' kibble needs! We are also in charge of the sterilisation campaigns in the streets, we pay for the medical expenses, and we do our best to promote the dogs of the pound on social medias so that they have a chance to be adopted and get out of this hell...

Since the pandemic, and now the war in Ukraine, donations and adoptions are becoming increasingly rare... We are only a handful of volunteers taking care of hundreds of dogs, and the situation is only getting worse: the more time passes, the less human or financial support we receive! We desperately need help, no matter what form it takes, the dogs' lives depend on it!"

5. Nicoleta doesn't want to receive any money, only kibble to prevent the dogs from starving. 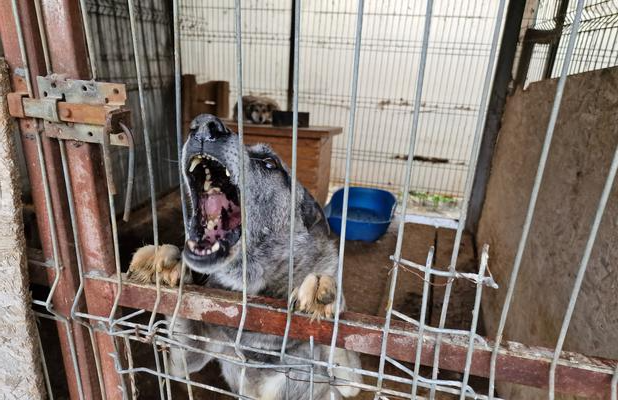 "Since we started rescuing stray dogs, there are fewer and fewer of them on the streets! Unfortunately, the locals are still indifferent to the situation of stray dogs, which saddens me greatly... I fear that people will continue to abandon their animals, I keep hoping that they will understand the importance of neutering, and that is a big part of what we are fighting for!

If we weren't here, I truly believe that many of these dogs would simply die of hunger or disease in the streets, in complete indifference... I am convinced that our actions make a difference, we save the dogs from a certain death and we give them a chance to live properly, they deserve it!

I am still very sad and worried, I don't know what will happen to the dogs in our care if we can't feed them properly... I am afraid that we will have less and less resources to take care of them. My biggest wish is that people will get more involved in our fight, and that we will be able to save even more dogs from misery than we already do today!"

6. If this campaign is successful, Nicoleta will not receive any money but 4800 kg of kibble, delivered from the Animal Webaction logistic platform in Romania. 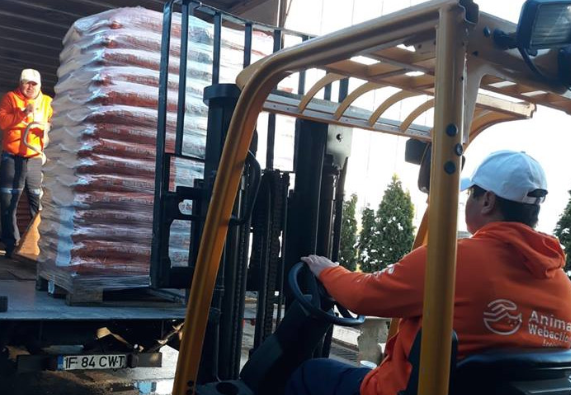 7. Nicoleta's friends have already done their utmost to support the dogs at the pound, she can now only rely on this campaign to get kibble!

"In Romania, no organisation supports us... But we sometimes receive money or food from Germany: from private individuals or associations such as 'RespekTiere Leben'. The problem is that even these people are at the end of their means, there are so many animals in need, we are only a small part of them... We have contacted many other organisations around the world, but none of them have been able to help us buy kibble, mainly because they are already spending their resources elsewhere.

We regularly organize sterilisation campaigns and it's usually the NGOs that fund them, we used to do two or three a year but this year we were only able to do one due to lack of funding... We have reached the end of our means, if this campaign succeeds it will save our dogs, we have no other solution!"

9. In Romania, it is difficult to find funds for kibbles, there are no aid, no grants, no foundation... Many abandoned dogs die alone in the streets, in complete indifference. 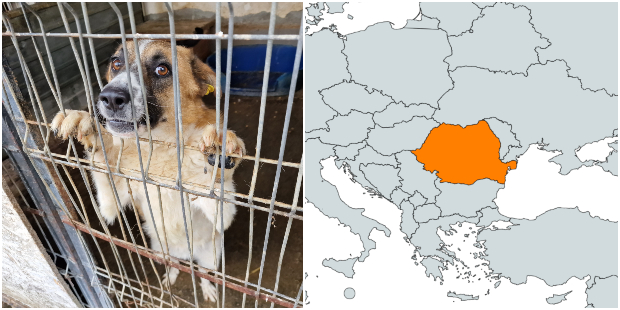 If you know of a foundation or NGO that could help Nicoleta, please invite them to contact us so that we can put them in touch.

If you represent a Foundation or an NGO for animal protection, please help the dogs of the Valcea Pound, contact us and we will put you in touch!

Here is your quiz Iris

Here is your quiz Titi