Orchidée - Shortened deadline There are 0 cans missing to succeed

This campaign succeeded, it has been delivered on the 09/06/2022, the association will send us the delivery pictures soon. 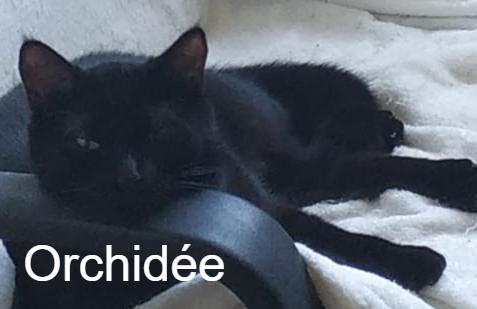 A Pas de Chats decided to move forward the ending date of their campaign because the quantity left in their stock of canned food is highly critical. They are conscious that it might increase the risk of failure of this campaign.

Orchidée is a young cat of 9 months old, that we found with a big coryza. Her eyes were all stuck ! So we put her on antibiotics, and we apply some ointment for the eye area.

Her eyes have improved slightly, but she is still coughing and sneezing. Because her airway is congested, she also has difficulty breathing normally.

2. She is constantly stressed!

We don't know what happened early in her life, but Orchidée is a very fearful cat. We placed her in a foster home because life on the street was very difficult for her. But she is still very stressed...

3. Canned food would be an opportunity to give her back her strength and confidence

To recover some energy despite the disease, Orchidée will need rich in vitamins canned food. Such a palatable diet, given regularly, would certainly help to soothe her. Not to mention that taking her medicine in her food would make her life much easier!

4. The situation is not getting any better!

Not long ago, we were still at 300 cats to take care of, with a deficit of several thousand euros. Unfortunately there have been many deaths, as well as a few adoptions. So the number of cats has decreased, but we still need help!

Here is your quiz Tania

Scabies, virus... Tania was in a bad state, and will need help to get back on track!

Here is your quiz Suzon

Suzon had to die... that's all that was planned for her!