Coquin There are 288 cans missing to succeed

This campaign has failed... Coquin hasn't received anything. Why?

It is always a huge disappointment to see a campaign fail, it means that the concerned animals will not receive any help. Unfortunately, we can not ship incomplete campaigns.

When a campaign fails, why can't you at least deliver what has been collected ?

We want to maximize the help we are all bringing to the animals in distress. Our campaign goals are calculated to balance our storage, delivery and manufacturing costs of the offered products.

Delivering failed campaigns would generate too many costs, which would eventually lead to the bankruptcy of the website and leave all the animals that we could have helped alone...

The delivery of unfinished campaigns is also physically impossible for some products (if only 50% of a kennel is financed: we can not cut it in half).

Why can't you at least transfer the collected money to the association ?

Our activity is regulated by the french tax law, it forbides us to transfer money instead of the advertised product (article L 548-1 of the Monetary and Financial Code).

For this reason, when a campaign fails, donations are immediately refunded. If they want to, donors can send this money directly to the association.

If you can't transfer the collected money to the association, why don't you just send it to another one ?

Our activity is regulated by the french tax law, it forbides us to use the money for anything else than the original use announced in the campaign (article L 548-1).

So, unfortunately, we are not allowed to transfer donations from a campaign to another.

What happens to the free clicks assigned to a failed campaign?

Free clicks are saved before being reallocated to other campaigns (free clicks being immaterial, they are not submited to the same obligations than financial donations). 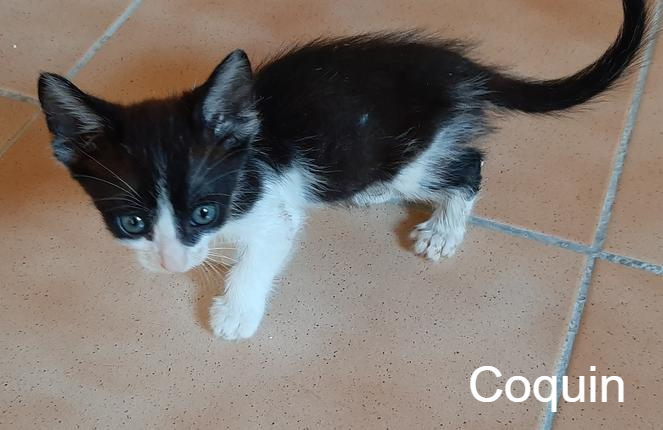 This campaign failed, it won't be delivered... Collected quantities have been cancelled (payments have been transfered back and free clicks have been saved in a stock).

The poor rascal weighs only 360 grams!

1. He was abandoned when he was not weaned!

Coquin is a one month old kitten, that we found with his brother and sister on a walking path. The poor things had just been abandoned at only three weeks old!

Completely disoriented and defenseless, they were covered with resin, because they had tried to find refuge under a pine tree...

When we found Coquin, he weighed only 360 grams! Weaned from his mother by force of circumstances, he is just starting to eat. But he is already very late in his growth.

3. Kitten food canned food would give him the nutrients he needs

A vitamin-enriched diet such as the kitten food canned food designed for young kittens would allow Coquin to gain weight quickly.

By meeting all his daily needs, such a food would help him grow up healthy, despite his complicated start in life.

4. This year is worse than the last!

With 300 cats in the village and about 20 kittens, the situation is becoming catastrophic. As if that wasn't enough, there are many females that have been abandoned and not sterilized...

We have tried to collect in stores, but people don't give food for kittens or older cats. On top of that, veterinary costs have exploded. Every year is worse than the last!

Here is your quiz Marcel

Marcel has big ear infections that keep coming back and hurt him!

Here is your quiz Calisson

Calisson has so much arthritis that once he lies down he can't get up by himself!