SOS 135 dogs Bosnia There are 0 kg missing to succeed

This campaign succeeded, it has been delivered on the 25/11/2022, discover the delivery pictures. 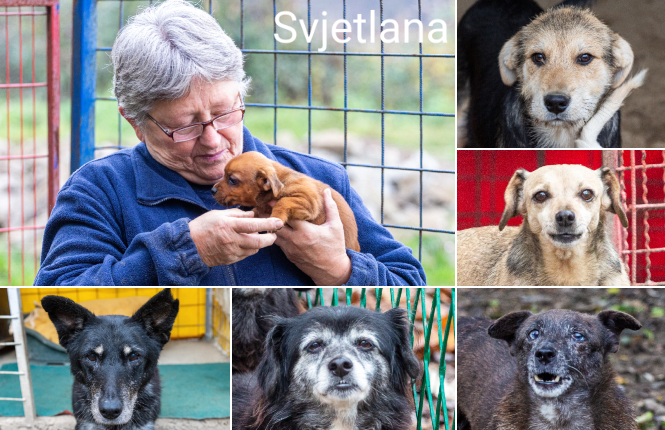 Animal Webaction visited the site 15 November 2022 and confirms the situation described below.

1. In Bosnia, Svjetlana is almost out of kibble to feed the 135 dogs at her shelter, they will starve if no one helps! 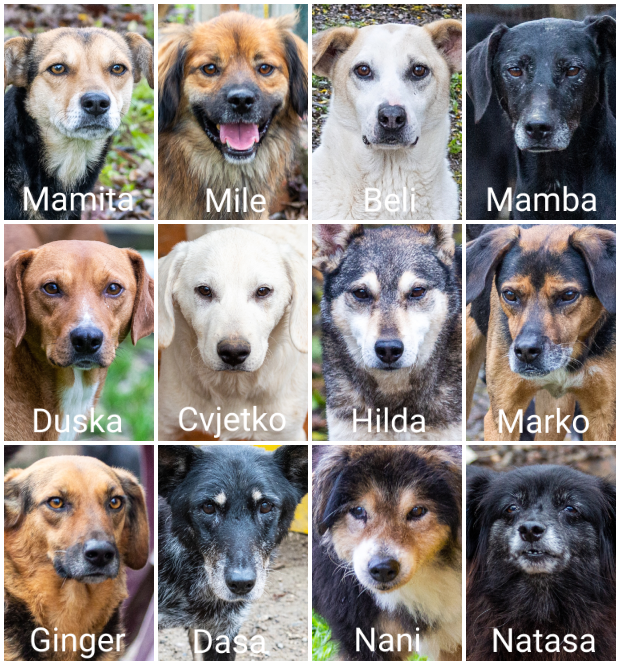 "I have 135 dogs under my care at the shelter and their number steadily increases: many abandonments of unsterilised dogs keep happening in the region… Only a few people have the decency to at least bring their dogs directly to the shelter, the majority just leave them to their own devices in the streets, especially the litters of puppies…

It’s a bigger struggle each month to get kibble for my dogs! What I have left in stores to feed them will barely last another week. In addition, it’s a very poor quality diet for them - knowing they’re all extremely weak and/or ageing, I have big concerns regarding their abilities to make it through the harsh Bosnian winter without the required calories…

The last kibble campaign unfortunately failed, so I feel like there's an impending catastrophe ahead: my huge debts prevent me from placing any order to the kibble supplier. It’s a very stressful situation, I lack financial means and in a couple more days, I just don’t know how I will feed my dogs! I can’t sleep at night thinking of this kibble campaign… Another failure will rush my dogs to their deaths!"

2. Svjetlana's rescue dogs are underfed: without kibble, they won't live through the Bosnian winter! 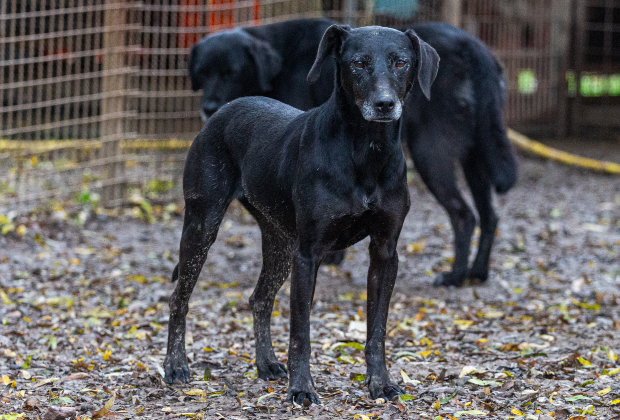 "I only have a very low stock of mediocre kibble left, so I try to make up for these small portions by adding a bit of old bread, pork grease… This diet is absolutely unhealthy for them and each week, I find another underweight dog at the shelter! They can’t put on a healthy weight with such unfit food…

Besides, many of them are ill-processing it and they often get diarrhoea, which makes them lose their strength and weight even more! Many are ageing or fragile (like the mama dog and her babies I recently took in), so weight loss is just the first step for them before getting very sick… And without kibble, the only outcome will be death.

Most of my dogs were saved from terribly violent lives in the streets. Out there, hunters are hired by the local government to coldly kill strays… Letting my dogs go back there is like a death sentence, it’s unthinkable! Just like having to watch them painfully die from starvation at the shelter if I can't get kibble... They count on this campaign's success!"

3. Zivka is emaciated and ageing: she relies on this kibble campaign's success to gain weight and strength... 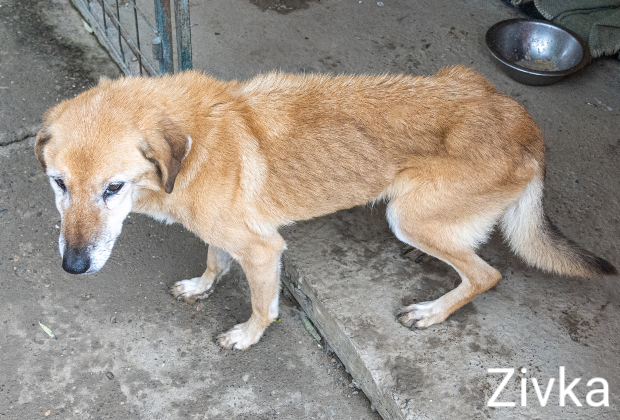 "Zivka is at the shelter along with her brother Aljosa. They were abandoned with their mother and another sibling, so I rescued the whole family. They grew older together and now, Zivka only has her brother left; they’re in their own little world. Zivka is extremely shy and will probably never have a chance to get adopted...

The least I can provide her with are proper kibble meals every day, which, sadly, I cannot do right now… I’m very concerned about her health, she’s been losing more and more weight recently. She really needs this kibble delivery to put on a healthier weight and gain enough energy to make it peacefully through winter..."

4. Svjetlana's shelter is deeply affected by inflation: without donations and subsidies, this campaign is her last option to feed her dogs! 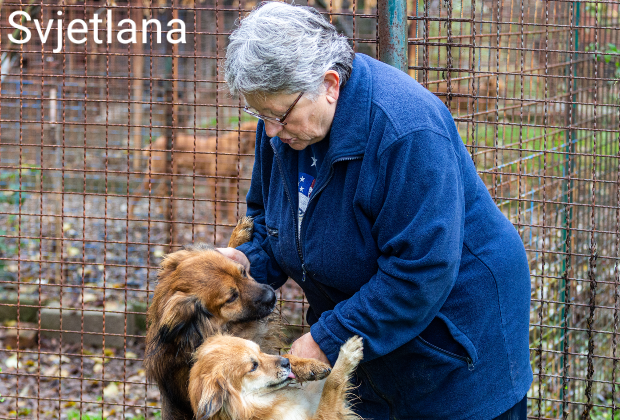 ​"Since inflation has set up, I struggle covering every expense, kibble and vet care prices have indeed skyrocketed. Also, people can’t donate like they used to, they prioritise their own personal situations over that of dogs in need… Therefore I have no other alternative than indebting myself over and over to keep taking care of and feeding my dogs. My lack of resources is real and at this point, I can no longer ask my usual food supplier to deliver some more, since I already owe them too much money…

I feel hopeless… It’s been months since the local government decided to stop subsidising the shelter without any explanation and even if I applied for it again, I’ll get a negative answer. Dogs aren’t a priority here. I’m out of money and I can’t get kibble for my dogs without help, now… I have no other solution but to ask for people’s generosity again and make this Animal Webaction kibble campaign succeed! It will be a disaster for my dogs if it fails again!"

5. Svjetlana is not asking for money, only kibble to keep the dogs from starving. 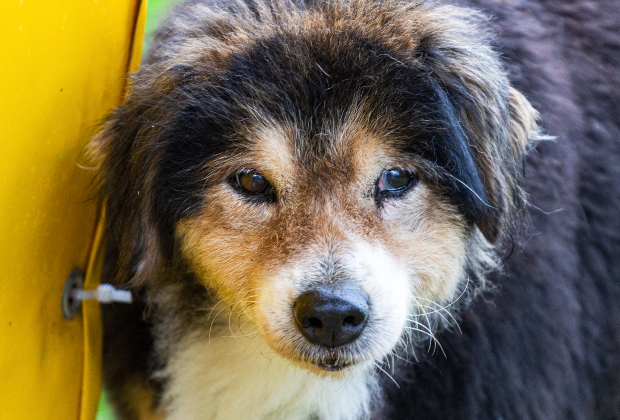 "I started this shelter to save dogs from their awful living conditions in the streets. I couldn’t stand seeing them famished, sick and wounded, also knowing they were being killed in order to “eradicate” their population… I was willing to share my passion for dogs and hoped there would be many people ready to get involved and help me rescue these souls.

The truth is no one wants to volunteer for the cause at all… I have no support from the local community! It’s striking to see that mentalities haven’t changed much since the creation of the shelter. Litters of puppies are literally thrown away, as there is still a widespread reluctance to sterilisation - yet, people don’t want to take their responsibilities.

There’s a total indifference towards dogs at every level! Without the shelter, there would still be hundreds of strays in the streets... But I wish the local government realised how much they need the shelter, how positive an impact it makes not just for dogs but everyone! Without kibble, I won’t be able to continue giving many dogs a better life."

6. If this campaign succeeds, Svjetlana will not receive any money but 1440kg of kibble, delivered from Animal Webaction's logistics centre in Bosnia. 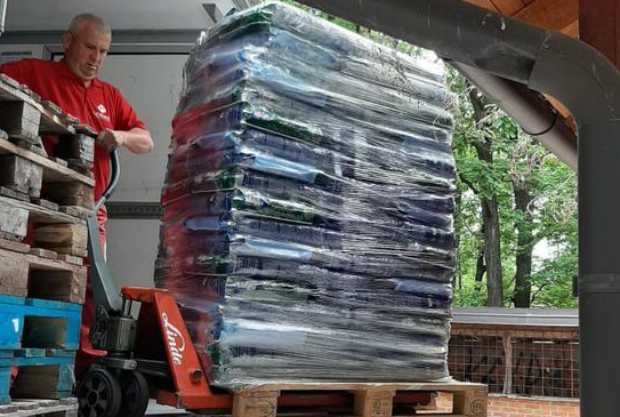 Animal Webaction has a logistics centre in Bosnia which allows us to intervene quickly and deliver kibble.

7. Svjetlana's supporters have done all they could, she now only relies on the success of this campaign to get kibble!

“A Dutch organisation is my shelter’s regular donor, they pay for my 3 employees’ salaries and communicate around the shelter’s actions and adoptions… Without their precious help, the shelter would disappear! But sadly, they’re impacted by the crisis too, so they can no longer help me pay back my kibble debts… My recent calls for help have been unsuccessful and the scarce donations I get don’t allow me to cover all the shelter’s expenses, especially vet bills and kibble.

I rescue many dogs who require heavy surgeries, treatments… Without support, my debts keep stacking up to save their lives… I’ve reached stalemate. Adoptions have definitely slowed down, since none happened in the last few months. These dogs deserve a normal, happy life and it’s devastating for me to know I’ll soon be unable to cover their most basic need: kibble. I‘ll be beyond thankful if people help make this campaign succeed!“ 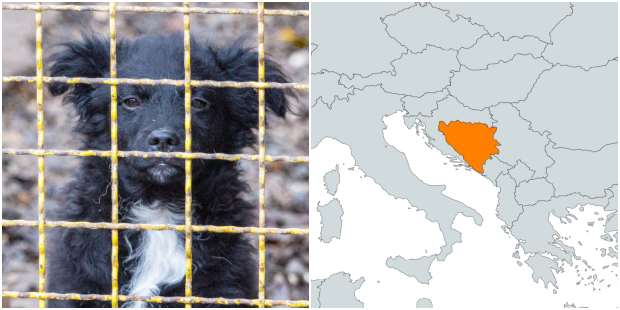 If you know of a foundation or NGO that could help Svjetlana, please invite them to contact us so we can put them in touch.

If you represent a Foundation or an NGO for animal protection, please help Svjetlana's dogs, contact us and we will put you in touch!

If you want to come to Svjetlana's shelter to help her, or if you want to send her directly some kibble or a cheque, contact her via the association's Facebook page (note: direct help is under your own responsibility).

Here is your quiz Moon

Little Moon was abandoned in a ditch, when she was at her worst!

Here is your quiz Gloria

Falling from the 4th floor, the little Gloria was seriously injured in the head!