This action succeeded, it has been delivered on the 15/02/2019, discover the delivery pictures. 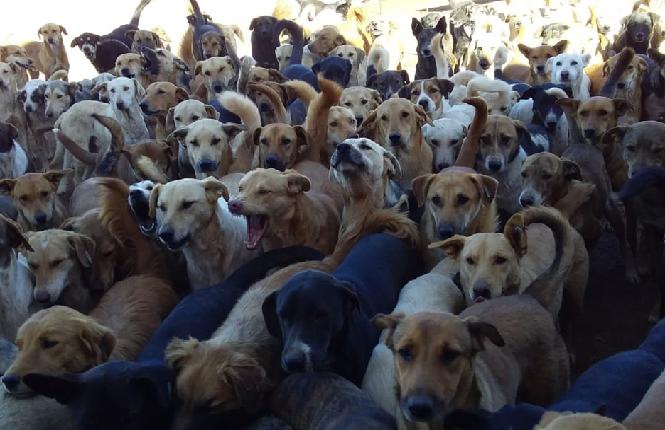 Soon, 800 dogs will be out of food : already on rations, they are hungry!

In the Souss region of Morocco, the mass extermination of street dogs has been ongoing for 10 months now.

As the unique alternative to slaughter, the shelter has gathered hundreds of dogs: 800 dogs now live there.

Food reserve decreases day by day, and will be over on saturday.

On rations for months, dogs are already hungry!

Worse, they might start fighting and killing each other again if no food can be found.

Michèle already had to stop rescuing other animals, to protect dogs in the shelter at all costs.

Without subsidies or any regular help coming from other associations, she must take on all the expenses of the shelter by herself, a situation that is impossible for her!

The Animal Webaction community swung into action to help her last august, we would like to support her again by delivering 5000 kg of kibble as an emergency.

A huge amount of food is needed to feed 800 dogs: more than 8 tons of food should be bought each and every month to make everyone eat their fill.

It is simply impossible for Michèle to get such quantities, she can only get hold of 5 tons at best. To calm the dogs' hunger, she adds dry bread reduced to crumbs, water and barley flour (this one helps to limit diarrhoea).

Last August, the Animal Webaction community swung into action to offer them 7 tons of dry food: we want to help them again, this time by collecting 5 tons urgently.

2. By February 9th, there will be no food left. Dogs will start fighting and killing each other again!

Due to the lack of separation, the shelter is organized in packs: the largest group now counts 100 dogs, the smallest 30. With so many dogs, it is impossible to contain a fight if it breaks out, which is why it must be avoided at all costs

Last year, the shortage of food broke out even as dozens of new dogs were brought to the shelter every day. The fights were then daily and sometimes had dramatic consequences: several dogs did not survive.

Not without trouble, Michèle managed to stabilize the situation, but if a new shortage occurs, the fighting will resume. At the shelter, dogs do not have pens, but are kept in packs of 30 to 100 individuals: a small confrontation can very quickly become out of control.

3. Hunted by local authorities overnight, these 800 street dogs owe their survival to Michèle only

The shelter was set up in a hurry in April 2018, following the massive slaughter order for stray dogs launched by local authorities. Commited to the association Le Coeur sur la patte by convention (Editor's note: originally established as part of a sterilization program), the municipality of Agadir didn't exterminate dogs like the surrounding municipalities.

Instead, on Michèle's request, the municipality decided to catch the dogs and bring them to the association. The association, which at the time had only one free clinic that could accommodate 80 dogs, found itself with the load of more than 500 dogs in just 2 weeks, gradually reaching the 800 currently accommodated....

"Thanks to the municipality of Agadir, we had begun a sterilization / vaccination program to eradicate rabies and fight against canine overpopulation. This program unfortunately was interrupted, so we had 2 solutions between letting our dogs get killed, or bringing them back. And I asked for them to be brought back. That's why we had a dog tsunami, and that's why we ended up with a shelter for 750 dogs," said Michèle, founder of the association, a few weeks ago.

4. If we don't reach the target, dogs won't receive anything

We can intervene, we already booked a truck and pallets, but we have to pay it before February 14th.

Most of the dogs brought to the shelter have never been vaccinated: distemper and parvovirus have been rampant for months. The only way to preserve these dogs, and give them a chance to be adopted one day: vaccinate, sterilize and de-worm them all regularly.

Enormous veterinary costs, in addition to the regular expenses necessary to maintain the shelter and its dogs:

"With 800 dogs in a shelter, we have a huge budget. The budget for food and employees only already exceeds 70,000 dirhams (Editor's note: about 6500€), after which we have the medical care, revaccinations, sterilizations of the last dogs who arrived."

6. To save the dogs from the shelter, all rescues are now interrupted

For 9 months, the shelter gathered several dozen dogs per week: the agents of the city of Agadir were continuously bringing in new individuals captured. For 9 months, Michèle hoped that the slaughter measure would only be temporary, and would come to an end. In vain.

Faced with very significant economic and logistical problems, Michèle was forced to close the doors of the shelter last December. Because welcoming more animals into the shelter meant, at this stage, putting them all at risk.

"This decision was made after months of reflection due to many problems encountered, including the inability to accept new dogs, both in terms of infrastructure and finances, these 2 points exceeding our capacities by far."

For the past 10 months, Michèle has been doing everything possible to feed and care for the dogs in the shelter, but has so far not been able to find any regular help.

While some international foundations provided one-time help last year, the funding of the shelter on an ongoing basis is only possible thanks to the help of a few individuals, and the money invested by Michèle herself.

The subsidy provided by the municipality of Agadir has lapsed since the shelter no longer welcomes new dogs, everything rests on Michèle: "At the end of the month I don't know how to pay. What I did was a bit crazy"

"For 40 years, we've been killing, poisoning, slaughtering. I know there are many stray dogs, but it is not aneffective solution, unfortunately it only increases the problem"

9. We must help them get through the next few months:

10. Optimism and perseverance are Michèle's strengths

Born in Morocco, Michèle never accepted the poisoning and slaughter of street dogs. In 2011, she created the association Le Coeur sur la Patte. Its objective: to develop a sterilization program to contain the population of street dogs in Morocco. The program started in Agadir in 2016, with more than 1000 dogs sterilized, vaccinated and released by April 2018.

Driven by hope that the program could be resumed quickly following the slaughter order, she took the necessary steps to save as many dogs as she could in the meantime. "We have wonderful dogs in front of the door who are just expecting to live, we have no right to slaughter them," she said.

If 800 dogs are now living in the shelter, she herself welcomes 110 more dogs into her home. A commitment that cost her her marriage, and occupies her entire life:

"Moroccan dogs are absolutely wonderful: you give them a piece of bread, they love you for life. I get up in the morning at 5:00, I start cleaning. I live barricaded, it's a lot of work. I love them and I get my energy from them, but I never get a second's rest."

If this collection succeeds, the 5,000 kg collected will be distributed to the 800 dogs living in the shelter ​​​​.

Here is your quiz Polly

Polly was very skinny when we took her in...

Here is your quiz Princesse

Princesse is so skinny, we're concerned about her growth...