SOS for 102 dogs in Spain! There are 0 kg missing to succeed

This action succeeded, it has been delivered on the 28/02/2019, discover the delivery pictures. 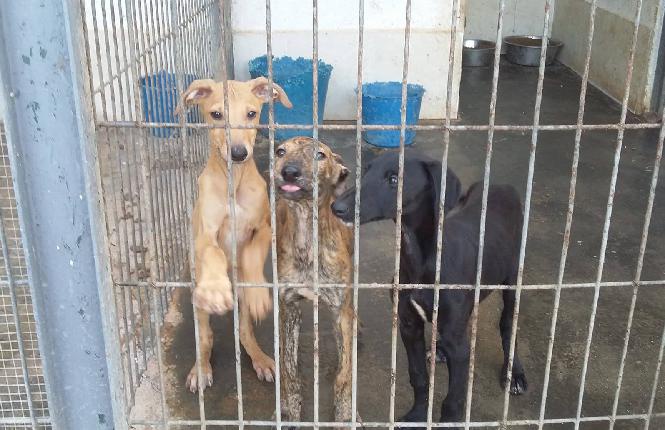 In a few days, Miguel's shelter will be out of food for its 102 dogs!

In Spain, the hunting season has just ended, leading to many abandonments.

In his shelter, Miguel has already taken in many dogs, and is expecting several dozen in the coming weeks.

With no food left, and 102 dogs already waiting to be fed, Miguel is overwhelmed!

He also has to deal with the disease that has been affecting the shelter for months: a fatal parvovirus epidemic, many cases of leishmaniasis...

The city hall refused to provide him with a grant, no foundation agrees to help him: Miguel finds himself alone with huge costs he simply cannot afford.

He can only count on one association, which is going through a bad time, and is unable to buy anymore food at this stage.

To help them, we want to send 4320 kg of dry food as soon as possible.

1. On February 23rd, the association's dog food stock will be over : the 102 dogs of the shelter won't have anything left to eat!

2. In Spain, hunting season is over since February 1st : 10 dogs have already joined the shelter, et Miguel still expects to save several dozens of them. How is he going to feed them?

February 19th 2019, early morning: Miguel could catch this male wandering with a broken leg, since called Galileo. He bought him to the vet immediately. His neck wound is certainly due to the ripping off of his chip, which is typical of the abandoned after the hunting season...

In Spain, when hunting season ends, plenty of galgos and podencos (the main breeds of dogs used by hunters) are abandoned if their owners feel they have not hunted well enough. Some of them even suffer unimaginable abuse, the hunters thereby "clearing their honor"...

For Miguel, it's the worst time of the year: each winter, he witnesses a huge wave of abandonments around him. He can't resign himself to letting them die, especially since those dogs are usually no more than three years old when thrown out.

Thanks to the French association “Celtiques lévriers et Cie”, 10 dogs have been adopted since our last collection. But within 2 weeks, Miguel has already rescued as many abandoned hunter's dogs...

As every year, the shelter will continue to fill up in the coming weeks: Miguel estimates that there are still 30 or 40 more dogs to arrive...

Unfortunately, he has no more dog food to feed those who are already at the shelter!

3. These are only a bunch of the 102 dogs gathered at the shelter who need our help

We are able to take action, we have already booked a truck and pallets, but we have to pay our transporter before February 26th.

5. The shelter is currently facing an epidemic of leishmaniasis: Miguel is exhausted by the extra work and discouraged by the costs to be incurred

Leishmaniasis is a chronic parasitic disease very present in dogs in Spain. It can be lethal if not managed. In dogs, leishmaniasis causes skin problems, faulty kidney function and diarrhea.

Besides extra cleaning and disinfection work for Miguel, the weight of this disease is also financial: sick dogs must undergo a lifetime of therapy, and a regular medical follow-up should be provided...

If we send Miguel dog food, his expenses will be lightened and he will be able to continue taking care of sick dogs!

6. This winter, Miguel already had to fight another disease: a parvovirus outbreak has been fatal to several puppies

During the winter, the shelter was affected by an epidemic of canine parvovirosis, a kind of extremely contagious gastroenteritis, and very often deadly to puppies.

Several babies died because of it while they had just been taken out of the street and not even had a name yet... This disease transmitting among other things through feces, Miguel needs to pay even more attention to boxes hygiene, particularly those where he keeps puppies...

7. No subsidies, no foundation wants to intervene: the shelter only works thanks to Miguel and a French association

Miguel asked the city council and the foundations to help him: they all refused. The city council is already subsidizing the municipal impoundment and does not want to fund a private shelter.

The financing of the shelter therefore depends only on Miguel’s personal income and the support of French association Celtiques lévriers et Cie.

But this association is also on its last legs… We are their last and only hope!

8. Overwhelmed by very large veterinary costs, the ressource association in France has no money left: she can't buy dog food!

Every month, the association Celtiques lévriers et Cie already pays half of the rent for the land where the shelter is located.

Down on its luck, it recently had to face a black series: massive arrival of cats to sterilize and vaccinate, previously adopted dogs abandoned under false pretexts and in bad shape, emergencye rescue of an epileptic dog...

"We only collect donations on our Facebook page and during store operations, but what we manage to get is largely insufficient to cover our costs", Sandrine, the vice-president of Celtiques lévriers et Cie association, explains.

Now there is no money left at all.

In Spain, galgos are locked in the cellars of their owners and only go out to hunt.

They are beaten if their efforts are inconclusive, scarcely fed, and thrown into the street when they no longer run fast enough to win the hunting contests.

Exhausted and abused, dogs are often too weak to survive alone in nature.

Miguel welcomes them to his refuge: he heals their wounds, nourishes them, and offers them a quality of life that those dogs have never known before. Unfortunately, the care given to them is expensive: Miguel can no longer afford to buy kibbles!

10. Thanks to Miguel’s hard work, these dogs were saved

11. Miguel devotes his life to saving the galgos!

As his full-time employment does not allow him to be present at the shelter all the time, two volunteers help with collecting donations and equipment, construction of new boxes, care and treatment of sick animals, etc.

He comes to the shelter in the morning before going to work, comes back at his lunch break, and comes back again in the evening after his long day at work!

Miguel dedicated his entire life to the animal cause. He’s very humble and usually tries to deal with his problems on his own: if today Miguel accepts our help, it is because the situation is really serious...

If the collection succeeds, the 4320kg collected will be given to the 102 dogs gathered in Miguel’s shelter.

They will also allow Miguel to go on hosting galgos abandonned after hunting season is over.

Here is your quiz Pakita

Here is your quiz Rita

Rita is sick and is expecting babies!