This campaign succeeded, it has been delivered on the 14/03/2019, discover the delivery pictures. 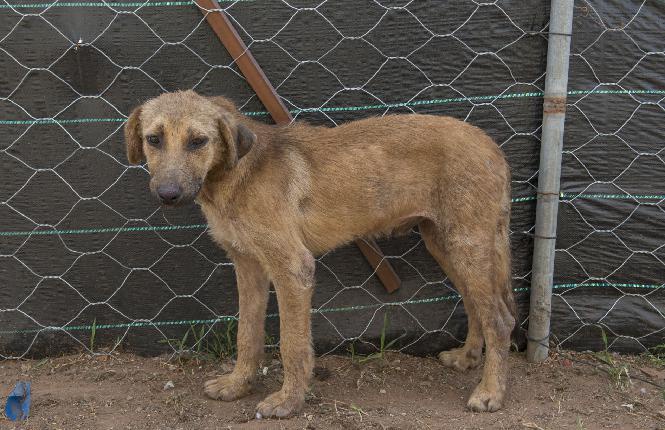 We went to the shelter on February 27th : there were only 3 bags of dog food left!

We saw hungry dogs eating bread with the remaining food.

Worse, since our visit, the last bags of food have all been used, Anas and Mira cannot buy any more because of the lack of funds.

They have tried online collections but no one is helping them, suppliers refuse to work with them, and the numerous SOS launched to foreign foundations are unsuccessful.

Anas and Mira are striving to save the suffering Moroccan dogs, but cannot continue without help, and count on us to accompany them in this difficult time.

We promised Anas and Miras that we would launch this collection for their shelter, even if we don't know if it will succeed.

We would like to send 4000 kg as soon as possible.

1. During our visit on February 27th, there were only 3 bags of dog food left, which have all been used since then...

For months, the association has been struggling to feed the dogs at the shelter. We went there on February 27th, and could only notice that there were only 3 small bags of dog food left...

The few bags we photographed have been finished since March 1st, Anas and Mira don't have enough money to buy more.

Relying on donations, which remain rare and random, they are forced to find makeshift solutions day after day "For today, I don't know, I'm going to prepare chicken feet with bread" Anas told us on March 1st, since he had no food left...

2. Dogs haven't been eating their fill for weeks, they need to get proper food as soon as possible

The lack of funding endured by Anas and Mira is not new, but its consequences are increasing week after week, as their own resources are running out: they can no longer afford to buy dog food.

For several weeks now, dogs have been eating insufficient quantities of kibbles, which barely cover half of their needs. The few additional carcasses that Anas and Mira manage to obtain do not change much "This remains very insufficient for dogs and puppies"

Already weakened by their diet, the dogs are not in a condition to face a total absence of kibbles!

3. Most of the dogs suffer from illness, injury or disability: we must protect them from hunger!

Because they only have a small shelter, and few resources, Anas and Mira stick to gathering dogs who seem to be in great pain, and cannot endure a life on the street.

As a result, their shelter welcomes a large majority of dogs with disabilities due to accidents or ill-treatment, but also dogs suffering from diseases: leishmaniasis, scabies, demodecia, square disease etc....

4. If the collection fails, dogs won't receive any food

We can take actions, we have already booked a truck and pallets, but we have to pay for it before March 08th.

5. No supplier is willing to work with the shelter, and online fundraisings are not working!

The shelter is officially registered, but does not receive any subsidies: the money needed to care for the dogs comes mainly from Anas and Mira's own wallets, and to a lesser extent from the few donations they receive.

Unfortunately, these donations are still rare and online pools do not work. Because they have very little money and cannot afford to buy large quantities of dog food, no supplier is willing to work with them.

Their only solution is to put themselves into debt with a veterinarian who still agrees to give them credit, but the food is much more expansive this way, and they keep amassing debts!

6. Despite multiple actions taken and SOS sent out, no foundation agrees to help them: Anas and Mira are discouraged

While setting up their association, Anas and Mira were convinced that they would receive external help when the time came, that solidarity would work, but it is hard to get there.

To date, only a French association has come to their rescue: essentially by facilitating adoptions, and by sharing as much as possible the needs and rescues of the shelter. On the other hand, substantial and continuous financial assistance is impossible for this association: "From time to time when I can I help them either by setting up a fundraising, or on my own money" says its President, Fabrice Bienio.

As for seeking partnerships with other associations, all are beginning to lose hope after many unsuccessful attempts: "It is a waste of time and energy, it is clear that Morocco is not a priority".

7. Death threats and ongoing complaints: Anas and Mira had to move their shelter in a hurry to save their dogs!

Because they were bothered by the dogs' smells and barking, the neighbours of the former shelter grounds campaigned for months to see them leave.

In addition to the complaints filed, various neighbours threatened to poison the dogs several times: one of them even entered the shelter with a gun to scare Anas and Mira away.

Worried about their dogs and their family, they decided to move to another totally isolated area at the end of 2018. In addition to the costs involved by the move, a lot of work also needs to be done, and the trips required for dog rescues, veterinary consultations and food purchases are greatly complicated.

8. Precarious doghouses, insufficient separations: fights between dogs start to break out at the shelter, and are accentuated by the lack of food!

Having moved in a hurry, Anas and Mira set up a new shelter from scratch in record time. Unfortunately, no pens have been built so far: a few separations simply divide the dogs into smaller packs.

9. Facing so many difficulties, Anas and Mira are forced to choose between treating the dogs or feeding them: an impossible situation!

Because they only take in weakened dogs, and more or less severely injured, Anas and Mira are constantly confronted with very high veterinary costs.

Faced with the difficulties encountered, they have stopped rescuing new dogs for now, but there are still vaccines, deworming, and diseases that sometimes occur unexpectedly and need to be treated: distemper and parvovirus already affected several dogs at the shelter.

Anas and Mira often have to choose between buying kibbles or financing medical care...

With an estimated population of around 2 million stray dogs, Morocco has been carrying out mass slaughter operations at regular intervals for decades.

Although spay/neuter programmes have already been carried out in some Moroccan cities, they have so far always been abandoned eventually, as their results are too long to be seen.

11. Anas and Mira put everything at risk to save the dogs of Morocco

As a couple and parents of two children, Anas and Mira started with one rescue, then two, then a few others led in parallel of a busy life, before making the decision to create a shelter.

Mira has since been forced to resign in order to take care of all the dogs, especially to help those with disabilities step by step.

While they do not regret their decision, they hope that the situation will improve quickly, especially with more reassuring food stocks, and more important means to improve the daily lives of sick and/or disabled dogs.

If this collection is successful, the 4000 kg of dog food collected will be distributed to the 75 dogs gathered at Anas and Mira's shelter.

Here is your quiz Masha

Masha is still suffering from the after-effects of her life on the street...

Here is your quiz Praline

Since her owner died, Praline deals with her grief with food...