This action succeeded, it has been delivered on the 15/03/2019, discover the delivery pictures. 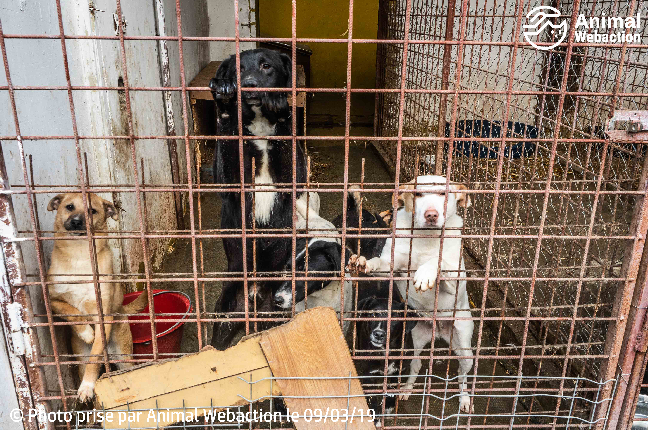 We send out an SOS ! Last saturday, we were at Georgiana's shelter in Romania : the food stock is nearly over, dogs won't have anything left to eat in a few days!

Calls for donations are not working, international foundations cannot help, city hall doesn't want to pay for anything... Everyone is passing the buck to each other!

These dogs' only fault is to have been born in Romania : should they starve because of this ?

With your help, we want to send a 3,600 kg truckload of dry food to save these dogs.

Our approach is fully transparent : delivery date along with several photos will be published on our website if this collection succeeds.

Warning! If the collection fails, we won't be able to pay the truck, and will have to cancel everything : in this case the dogs wouldn't receive any food (all donors who would have participated would be reimbursed)

To help Georgiana and her dogs, you can either donate online through our website (100% secure) or send your checks or food donations to the following address : every help matters!

1. We were at the shelter three days ago : the remaining food stock could be stored in a simple cupboard... On March 21st, there will be nothing left

Our reporter Bianca went to the shelter on March 9th, following an SOS received from Georgiana, the President of the shelter. On site, she was able to see that the remaining stock of dog dry food was dangerously depleting....

With 170 dogs to feed, Georgiana uses 2.5 tons of kibble every month, not to mention the food she has to buy in addition for the puppies she cares for. A real financial abyss, which Georgiana can no longer face "Every month, it's the same battle: food flies away as fast as it arrives" she tells us.

2. During our visit, Georgiana told us about the many dogs she's gathered in recent months: she is afflicted by so much suffering, and the shelter is full

Abandoned in a ditch in the hardest of winter, in a pile of snow, this mother and her two puppies remained petrified for several days before someone finally reported them to Georgiana. Unfortunately, one of the puppies had already frozen to death, but the mother and second child were rescued.

During our visit, several of the dogs recently rescued were still undergoing treatment and/or convalescence at the veterinary clinic.

When she talks about it, Georgiana does so with great emotion: "Over the past four months, I have had to recover many, many, many new dogs. I am always contacted for emergencies, and unfortunately, very difficult situations. I have seen so much suffering, and I have had to face the death of so many animals over the years..."

The anxiety and moral fatigue caused by these rescues are not the only difficulties: the medical costs are exorbitant, caring for these dogs is very demanding, and their complete recovery is difficult to guarantee in an already overcrowded shelter.

3. Georgiana told us about the sad fate of Fagaras' dogs, and the corruption she fights alone every day: for now, she is their only hope

Still resentful, Georgiana told us how, since the summer of 2018, Fagaras' dogs have been caught by dogcatchers and sent to the nearby Codlea pound. There, they are euthanized after 14 days if no one comes to save them before....

And yet, Georgiana fought for a whole year to take over the management of the Fagaras public shelter, a place kept in the shadows for 6 years, where dogs were left to die. Despite her hard work (entirely voluntary) the mayor of the city shut the pound down overnight, in favour of a partnership with Codlea's private managers. "Stray dogs bring them money, they don't want it to stop," Georgiana says.

Unable to abandon the animals to their sad fate, Georgiana adopted all the dogs from the public shelter before it was shut down, and took them to her private shelter. She is now stuck in that situation, and  has to rent both buildings from the mayor....

4. If the collection fails, the dogs won't receive anything

We can swing into action, we have already booked a truck and pallets for 3,600 kg of dry dog food, but we have to pay it before March 15th.

5. We observed Georgiana, constantly struggling to deal with eveything at the shelter. No one wants to help her: to manage the shelter, she had to stop working. We want to help her by offering her some food for the dogs!

During our visit, we became aware of the work required to properly care for 170 dogs: cleaning, caring, treating, feeding, taking the dogs to veterinarians, rescuing new dogs in distress... not to mention the search for funding, partners, and the promotion of dogs for adoption!

When she started her association in 2017, Georgiana tried to combine career and volunteer work at the shelter. An impossible mission: "For a while, I kept working, but I had become a robot," she says. "Here, we have to fight for everything. It's very difficult for me, because I have to do everything on my own."

Today, her only income comes from small jobs that she finds from time to time. Most of the money she manages to put into the shelter comes from her aunt, who left for the USA: insufficient for the astronomical sums needed for the shelter, and unsustainable on the long run.

6. Other small charities support Georgiana for adoptions, but none of them can help to buy food!

Georgiana is very active and collaborates with many small associations abroad, both to promote her dogs for adoption, to maximize rescues, and to make the voice of animal advocates heard (she recently spoke at the European Parliament in Brussels).

Unfortunately, financial difficulties are common to many associations, and none of them can help Georgiana to buy kibble. "We do help with trying to find homes for her rescues and we also try to help by raising awareness plus we try to raise funds for her. As a small charity we are limited in our help I'm afraid to say. I wish we could do more." says Tommi Townsend of the British association West Yorkshire Animals in Need.

7. Fagaras' vets are unwilling to work for street dogs: Georgiana has to drive 80km to treat her dogs in Brasov

Georgiana's feeling of fighting alone also comes from the fact that no vet in the city agrees to work for the survival of street dogs.

She is forced to travel tens of kilometres to Brasov, where she knows trusted veterinarians, to treat the dogs she gathers. A constraint that has already cost the life of one of the rescued dogs, who died on the way to Brasov.

8. For them and all the others we had the chance to meet, we must help Georgiana

9. For them, Georgiana makes a big difference

Rescued by Georgiana 7 months ago, Iancu had a gunshot wound, as well as several injuries related to a car accident. He required heavy care for a while, but he has recovered completely, and is waiting for a family to adopt him.

10. The dreadful public shelters of Romania

Dog hunters, commonly known as "Dogcatchers", receive money for each dog captured. This perverse system encourages them to pick up as many dogs as possible, regardless of whether they have owners or not...

Once the animals are in their premises, they no longer bring any money, and must therefore disappear as soon as possible to free up some space for the next ones. The luckiest of them are euthanized, the others starve to death, crammed into their enclosure in complete indifference...

11. Georgiana put her life on hold to save Fagaras' dogs, and she will not give up

Her shelter in Fagaras only dates back to 2017, but her commitment to animal protection has lasted many more years. Georgiana's love for the dogs in her shelter is visible to the naked eye, and emanates from each of the interactions we observed during our visit.

Still, there are many sacrifices implied, and the daily life is very difficult for Georgiana:

"My life is a mess, I have no family, I have nothing, my life is dedicated to dogs. I work very hard. I could have had "a good life", but I refused, and I don't regret anything, I'm happy with them."

Combative and optimistic, Georgiana impressed us with her moral strength:

"You can of course be discouraged, think that nothing changes, but if I didn't do what I do, there would be three times more dogs on the streets. And I met fantastic people, which is essential in the face of all this suffering: otherwise, it is possible to reach a point where you no longer believe in the human being."

If the collection succeeds, the 3600 kg of dry dog food will be given to the 170 dogs gathered at Geaorgiana's shelter.

Here is your quiz Jessica

Jessica is sick and expecting!

Here is your quiz Berlingot

Berlingot has got not teeth left