SOS starving dogs There are 0 kg missing to succeed 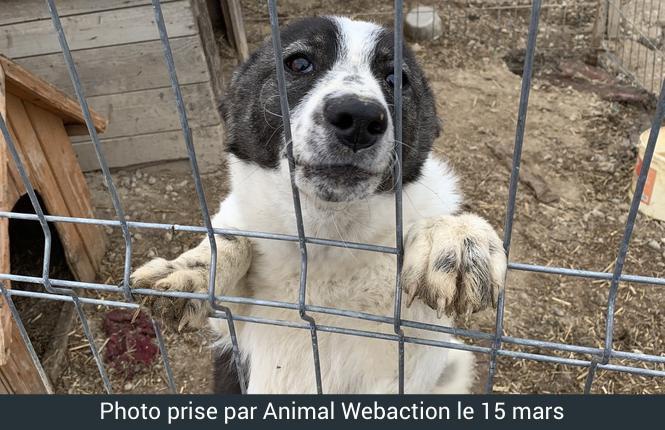 We went to the shelter, it's a disaster! The dogs are skinny, they don't have any kibble left.

In Romania, Ildiko's shelter now has 275 dogs, which she can no longer feed.

Devastated by a very harsh winter, she called us for help: we visited her on March 15

At the shelter, we saw many emaciated dogs, and an insignificant stock of dog food.

We also saw a shelter badly damaged by the storm that took place on February 22nd.

Overwhelmed, Ildiko faces up to so many difficulties the best she can, but will not wiggle out of it without help.

For them, we want to send 4800 kg of kibble as soon as possible.

1. We went to the shelter on March 15th: there is no more dog food, the dogs are already depleted

Last November, the Animal Webaction community swung into action to help Ildiko by collecting 5400 kg of kibble. Unfortunately, the last remaining bags were all used by February 23rd.

For nearly a month, Ildiko has been trying to feed the dogs as she can, buying a few bags of kibble when she can, diluting it with pearl barley and leftover bread if she has some.

Our reporter Andrei went to the shelter on March 15 following Ildiko's SOS, and was able to see that the dogs are already visibly thinner due to this diet: they urgently need kibble!

2. Over the winter, 120 new dogs were gathered at the shelter. Ildiko is overrun, and needs to focus on adoptions to relieve the shelter!

In only 4 months, Ildiko gathered no less than 120 new dogs to her shelter, representing a 50% increase in the number of dogs hosted! 25 of them are still undergoing treatment, 4 had to undergo major surgeries.

On site last Saturday, we noticed how difficult it is to run the shelter under these circumstances: lack of infrastructure, funding, but also volunteers to help Ildiko in her task.

She shared with us her difficulties of the last few months, the priority being to treat those who need it, and to increase the number of adoptions in order to relieve the shelter. Ildiko already has so much to do, she needs our help to get kibble!

Rudi was found wandering among the cars, totally blind and disoriented. Despite appearances, Rudi is only two years old, but his body has already suffered a lot

4. If this collection fails, dogs won't receive any food

5. A storm severely damaged the shelter a few weeks ago: repair is difficult, Ildiko feels overwhelmed 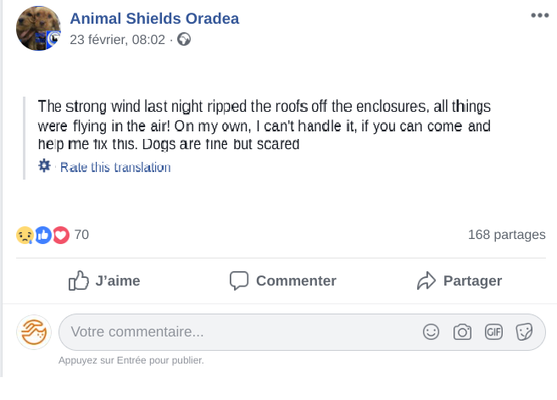 At Idliko's shelter, place has never been an issue. The equipment, on the other hand, is an important one: if Ildiko made sure that the grids are firmly installed, everything else has been built through resourcefulness.

To protect them from bad weather, the dogs had tin roofs and tarpaulins stretched here and there until last month, but a violent storm tore everything apart on February 22nd.

At the time of our visit, some roofs had already been reattached, and new tarpaulins had been installed for repair until Ildiko can do better.... But the damage is considerable, and does not give Ildiko time to find kibbles.

Since she started her association, Ildiko has always done many local actions to raise funds. As soon as she can, she sells various products such as jams that she prepares herself, key rings, decorative objects etc.... Unfortunately, this takes a long time and brings in little money.

She also manages to collect leftovers at low prices from shopkeepers, and benefits from some food donations. But all these actions only cover an average of 10% of the shelter's food costs!

As a part-time employee, Ildiko devotes all her income to the shelter: she and her husband live only on his own salary. A significant sacrifice, which is no longer enough to ensure the survival of the dogs:

"If I didn't have a job, these dogs would have starved to death a long time ago. But today, the situation is dramatic, I don't see how it could be any worse"

7. No foreign association wants to help: Ildiko has to manage on her own to buy dog food!

Ildiko is supported by only one foreign association, located in Germany: RespekTIERE. Very touched by the difficulties encountered at the shelter, the president of the association is unfortunately helpless as far as food is concerned :

"Ildiko is doing everything she can to give these dogs a better life. We helped her to build the boxes, but our association supports more than 40 shelters in Romania [...] I would be very grateful if you could help her"

Very supportive, Ildiko does not hesitate to help other associations when they need it, and has been involved in several critical rescues following calls for help from others. Today, she is the one who needs help.

8. Ildiko, between energy and optimism

Ildiko created the shelter in 2014, but was already rescuing animals before that, which requires a lot of sacrifices. "It cost me my marriage," she says about her first husband, who once asked her to choose between him and the dogs.

A part-time hairdresser, she runs every day between her job, the shelter, the vet and the search for food. She invests all her time and money in the protection of dogs. Despite the difficulties encountered, she remains determined to continue along this path:

"I am optimistic: as long as I am healthy, I will do everything to help the dogs. I have faith in the human being, and I know that there are good souls to accompany me in this task, even if I have received little help so far."

If the collection succeeds, the 4800 kg of kibble will be used to feed the 275 dogs at the shelter for several weeks.

Here is your quiz Paco

Paco walks all day long and sleeps in the street...

Here is your quiz Noisette

Noisette couldn't defend herself to eat!