SOS in Macedonia There are 0 kg missing to succeed

This campaign succeeded, it has been delivered on the 14/05/2019, discover the delivery pictures. 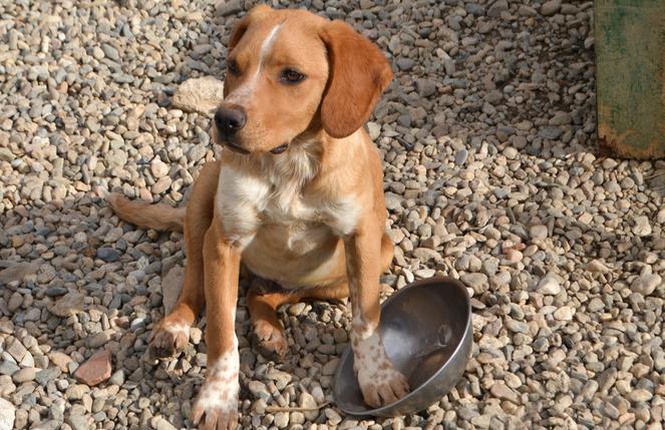 Abandoned by their kibbles supplier, the 219 dogs living in this Macedonian shelter will die of hunger!

Following an SOS, we hurried to Maggie's shelter in Macedonia (Eastern Europe) on April 11th.

For several weeks, the food supplier has refused to send food for the shelter, which is in too much debt.

This is a disaster! There has been no dog food for several days, dogs only survive thanks to some donated bread, but they are hungry!

The shelter hasn't been able to feed street dogs for a month already.

Maggie does everything she can so get through this, she calls for help by all means, on social networks and in the local paper, but no donation comes through.

Dogs will starve to death: Maggie begs us to prevent this, nor the city hall nor the other foundations want to come into action, we are her last hope!

From our logistic platform in Macedonia, we want to send 3 000 kgs of kibble as soon as possible to save these 219 dogs!

1. We went to the shelter a few days ago: there is no longer dog food. Despite a call for help in the local paper, no donations are being received... 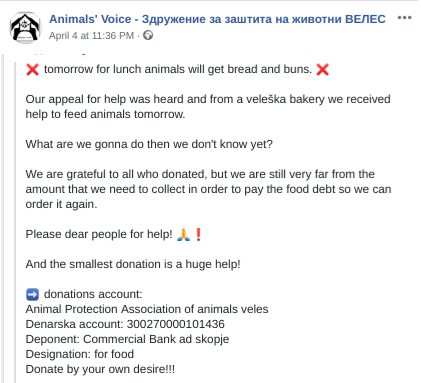 Made aware of the difficulties encountered by the shelter, both by the SOS launched by its volunteers and by those of the guarantors, we went to the site on April 11th.

We found no trace of any food: since the beginning of the month, the dogs have only been living on the remains of bread collected from local shops. The quantities are random and the whole not very nutritious: the dogs are hungry!

Worse, the street dogs that the volunteers feed every day have now been left to their own devices for 4 weeks: the association no longer has any food to give them!

2. The association is heavily indebted to its food supplier: he refuses to deliver kibbles until the debt is repaid!

For several months now, the association has been struggling to pay its bills to the kibble supplier: "We have reached this point because donations have decreased, while costs have increased," said Maggie, President of the association.

Today, the debt is so high that the supplier refuses to deliver again until it has been repaid.... An inextricable situation: the association does not have the means to repay its debt, but this supplier is nevertheless the only solution for it to continue to buy food, the others are far too expensive!

3. The shelter only hosts weakened dogs, who cannot survive on the street. Still, rescues have been increasing: the shelter is full and the funds completely exhausted

Over the past three months, 98 new dogs have been rescued by the association, all of them having one thing in common: their condition did not allow them to survive on the street alone.

Initially planned to house 170 dogs, the shelter now has 219! Adoptions are made, but are going too slow compared to the needs of dogs in distress on the streets.

The costs of treating and curing rescued dogs are huge, and sometimes long-term: "We have around 25 animals that need constant medical treatment (including chronic demodex, heartworm, leish non active, tvt Tumors, etc )"

4. Despite all these efforts, several dogs have died in recent weeks. Volunteers are exhausted and terribly worried, they need our help

Of the 98 dogs rescued over the last three months, 12 died: an extremely difficult thing to live for the volunteers involved... The current lack of food is yet another burden to bear for them :

"All of us are really devoted to give our dogs the best possible care and not having enough food makes things really harder for us. When we say not enough food we mean maybe next week we won’t be able to feed our dogs. Lack of food results in illnesses, and we can not really even take any more dogs because we won’t be able to feed them, therefore we are not giving them better life that the one they have on the streets."

We can come into action, we have already booked a truck and pallets, but we have to pay it before the 22/04.

6. Calls for help on social networks, from the local press, to local bakeries... volunteers and their guarantors are doing everything they can, but without success

Seeing her debts get higher and higher, Maggie tried by various means to make more people aware of the situation, and encourage others to help them. The guarantors in Germany and the United Kingdom have done the same.

Unfortunately, these measures are still insufficient and have not so far made it possible to repay the current debt: dogs currently survive only thanks to a few bakery donations... But for how long?

"We desperately need food for the dogs. We literally need every little help we can get" says Maggie.

7. They survived the worst, we cannot let them starve to death

8. In Macedonia, stray dogs are suffering from the atrocities of not only the State but of the locals as well...

With an estimated population of 1 million stray dogs, Macedonia regularly carries out massive extermination campaigns to "clean the streets", at least temporarily. Particularly violent, the last national campaign conducted in 2017 had led to many protests including internationally. The favorite method remains poisoning, which leads to a slow agony (sometimes for several days) of affected dogs.

Beyond national measures, the treatment of dogs at smaller scales is also very difficult. Many municipalities practice poisoning on their own, and the inhabitants themselves are often hostile to street dogs. Conducted with impunity, acts of cruelty carried by individuals are numerous (acts of torture, strangulation, abandon wild ... etc) and unpunished.

9. Revolted, Maggie and other volunteers struggle to save Macedonian dogs

Despite her youth, Maggie founded the association 5 years ago, and managed it for almost as long. Food, medical care, exchanges with the municipality and other institutions, requests for funding, sponsorship, complaints to the municipal police ... Her actions have brought together many actors on the spot in Macedonia, but also abroad in German and British associations. Maggie tries to reconcile the management of the association with her studies, her work, but also her family life: she welcomed her first child a few months ago.

10. What will the collected food be used for?

If this collection succeeds, the 3 000 kg of kibbles will be used to feed the 219 dogs of the shelter, as well as the dogs of the streets.

Here is your quiz Titi

Poor Titi found himself on the street after his mistress died...

Here is your quiz Léo

Leo's having a hard time getting around