Rescue for 170 Romanian dogs There are 0 kg missing to succeed
Question sent Your question has been sent to the association. It's being moderated.

Website in maintenance, collections are suspended.
Picture taken by Animal Webaction on the Monday 27 May 2019 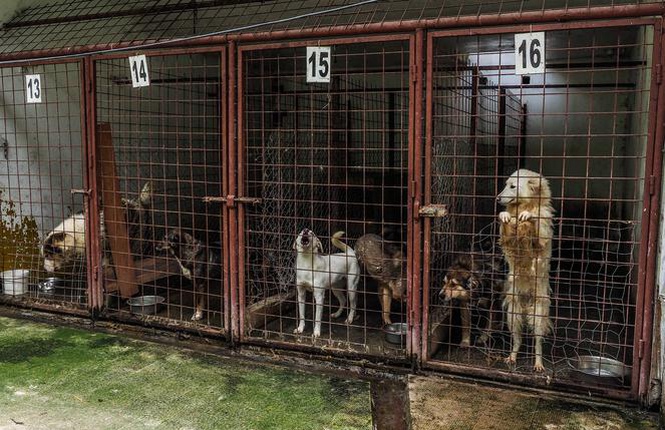 Picture taken by Animal Webaction on the monday 27 may 2019

Donate with trust: Animal Webaction has been on site and checked the truthfulness of everything presented in the collection.

In Romania, this shelter is out of food for its 170 dogs: they will starve to death!

Overwhelmed by the situation, Georgiana asked for our help: we went to the shelter on May 27th.

We saw an almost empty storage room, and dozens of convalescent dogs, who are too weak to cope with malnutrition.

Despite many SOSs and the active search for new partnerships, Georgiana is unable to raise funds or food.

The only association that helped her to buy kibble no longer has enough resources to continue, she asks us to help out.

We want to send 3000 kg of kibble as a matter of urgency.

If the objective is not reached, we will not be able to pay the carrier, the truck's departure will be cancelled.

1. The food stock is almost gone: soon, all 170 dogs at the shelter will have nothing left to eat!

For weeks, Georgiana has been struggling to find kibbles, but her actions are not working. Hopeless, she asked us to help, we went to the shelter on May 27th.

Only ten bags of food remained in the storage room, a quantity that could not even feed the 170 dogs in the shelter for 48 hours.... Since our visit, Georgiana has managed to buy a handful of bags, but there will be nothing left of them in a few days, and she will then not be able to buy any more...

On the spot, we met dozens of dogs still recovering, with a fragile health: they will not be able to face a shortage of kibbles!

2. Without food, Georgiana can no longer rescue new dogs to the shelter: an impossible situation for her

"I'm overwhelmed, I run all day and I said I wouldn't take in any more dogs... but I can't be indifferent! "deplores Georgiana, who is terribly affected by the situation.

But Georgiana is alone at the shelter, and on all fronts, both on the field and in fundraising, which does not work... Faced with the extent of the difficulties, she can no longer take in new dogs, at the risk of putting all of them in danger as well!

3.Georgiana and a partner association have been calling for help for weeks, but it doesn't work

"I cannot run all day from morning till midnight and so exausted to have time for fundraise for food or medical costs or to promote dogs for adoption.. Its time for changhe."  Georgiana points out.

Online collections on various platforms, calls for donations on social networks, various and varied communication attempts have all already been attempted. But they are very time-consuming and yield little fruit, Georgiana does not know how to move forward without outside help.

"I haven't even managed to raise the funds to pay for my last kibble order yet, which will be exhausted next week," Georgiana told us two days before we came.

4. Georgiana is doing everything she can to find help, but she is overwhelmed.​​​​​

Today, Georgiana is the sole caretaker of the 170 dogs: maintenance, care, feeding, veterinary visits, rescues... not to mention the search for funding, partners, and the promotion of dogs for adoption!

When she started her association in 2017, Georgiana tried to combine a career and volunteer work at the shelter. An impossible mission: "For a while, I kept working, but I had become a robot," she says. "Here, we have to fight for everything. It's very difficult for me, because I have to do everything on my own.

Georgiana invests as much time as she can in finding new sponsors. Unfortunately, if she manages to receive visits from foreign associations, they usually only help her to maximize adoptions...

We can come into action, we have already booked a truck and pallets, but we have to pay it before June 04th.

6. Small associations support the shelter for adoptions, but none can help to buy food!

Georgiana is very active and collaborates with many small associations abroad, both to promote her dogs for adoption, to maximize rescues, and to make the voice of animal advocates heard (she recently spoke at the European Parliament in Brussels).

"Fundraising in the UK has become very difficult...I think because of the Brexit uncertainty and austerity which is having an effect. The result is that WYAIN can't help as much as we used to or as much as we would like," says Tommi Townsend, President of the association. "2019 is by far the worst year we've had to face so far," she adds.

7. For them, Georgiana makes a huge difference

Georgiana has been rescuing all dogs, whatever their condition, whatever the medical costs involved, or the difficulty of their recovery, for several years. Without her, these dogs would have no other chance.

Thanks to all her efforts to develop new partnerships, Georgiana also has a very high adoption rate, including for disabled dogs: that is why we must help her to continue!

8. The plight of stray dogs in Romania

9. Georgiana put her life on hold to save Fagaras' dogs

Her shelter in Fagaras dates back only to 2017, but her commitment to animal protection can be counted in many more years now. Georgiana's love for the dogs in her shelter is visible to the naked eye, and emanates from each of the interactions we observed during our visit.

However, the sacrifices are many, and the daily life is very difficult for her at the shelter:

"My life is a mess, I have no family, I have nothing, my life is dedicated to dogs. I work very hard. I could have had "a good life", but I refused, and I don't regret anything, I'm happy with them."

Combative and optimistic, Georgiana impressed us with her moral strength:

"You can of course be discouraged, think that nothing changes, but if I didn't do what I do, there would be three times more dogs on the streets. And I met fantastic people, which is essential in the face of all this suffering: otherwise, it is possible to reach a point where you no longer believe in the human being."

This collection is organized by the Saving Orphaned Souls association. The 3000 kg of kibble collected will be delivered to Georgiana to feed the 170 dogs hosted at the shelter.