This action succeeded, it has been delivered on the 12/06/2019, discover the delivery pictures.
Picture taken by Animal Webaction on the Wednesday 29 May 2019 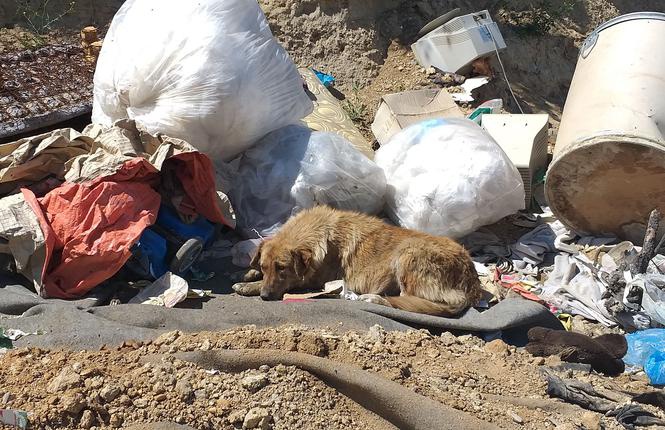 Picture taken by Animal Webaction on the wednesday 29 may 2019

These Macedonian street dogs are out of kibble, they'll starve to death!

Viktor and the small French association that supports him beg us to help the street dogs.

We went there on May 29th, and followed Viktor throughout the city to meet with stray dogs.

But Viktor has no more kibbles, the dogs only eat stale bread: they will starve to death!

We want to help them by sending  2 400 kg of kibble as an emergency.

If the objective is not reached, we will not be able to pay the carrier, the truck's departure will be cancelled.

1. Viktor no longer has any kibbles for street dogs, they mainly eat stale bread!

Every day, Viktor walks the streets to meet the dozens of stray dogs who have nowhere else to go, and to distribute food to them. Whether they have been wandering for a long time, or newly abandoned, it is not easy for street dogs to find food on their own: the food brought by Viktor are the only source of nourishment for about forty of them....

But the kibble stock is almost gone, Victor can only provide stale bread or leftovers of sandwiches bought at low cost in a local bakery. During our visit on May 29th, there were only 150 kg of kibble left, which dropped to 50 kg on June 4th.... Viktor keeps them for the weakest dogs: "I give them what I can" he simply explains.

2. With the hot season coming, the dogs dumped at the landfill will get intoxicated or starve to death if Viktor cannot feed them!

Three times a week, Viktor goes to the landfill on the outskirts of the city to feed the dogs who, unintendedly, are forced to live there. Thrown here like simple pieces of trash for the most part, they lead a difficult life: all have scabies, have very little interaction with men, and struggle to eat among the garbage spilled around them.

Unfortunately, a lot of waste is already rotting when it reaches the landfill, and this is aggravated when the hot season begins: temperature was already 28°C at the time of our visit. If Viktor doesn't find kibble quickly, the dogs will starve to death or get intoxicated!

3. The most vulnerable ones were rescued by Viktor: safe from the street, but not from hunger, they need kibble!

Animal lover since childhood, Viktor now hosts thirty dogs at his place : a number that changes regularly, which has almost doubled in the past...

To earn a living, Viktor works in a canine boarding house: an undeniable advantage that allows him to place certain dogsthere when they are too weak to survive on the streets, and too big to live at his place. However, Viktor has to pay a monthly rent for each of them, and remains their only food provider.

Especially fragile, these dogs will no longer have any kibbles once the remaining 50 kg at Viktor are gone : what will they become?

4. If we don't reach the target, dogs won't receive any food

We can come into action, we have already booked a truck and pallets, but we have to pay it before June 11th

5. Viktor doesn't have enough resources to buy kibbles, and his calls for help don't work!

Viktor not only invests his time in feeding abandoned dogs, but also in finding food to give them... He himself affords 30% of the food needed for all the dogs he feeds, but his income does not allow him to buy more.

Because he has no other option, and his calls for help do not allow him to buy kibbles, Viktor walks around local shops and markets to collect or buy some leftovers, especially old bread, at a low price. An unsuitable food for dogs, that comes in quantities largely insufficient for their needs.

6. As a committed activist, Viktor is doing everything possible to make the situation of dogs in Macedonia known, but no international foundation intervenes.

Involved in animal protection since his youth, Viktor has already rescued nearly a thousand of animals into his home, and is making a real difference on the ground. Every day, he seeks to reach a wider audience to raise awareness about the animal cause, but also to obtain a real change in the situation of stray dogs in Macedonia.

Viktor not only feeds and cares for stray dogs, but also spays them and gets them adopted, thus making a significant contribution to the management of stray dogs to overcome a deficient policy across the whole country.

7. A small French association tries to help Viktor, but its resources are very limited, it cannot buy kibbles!

From France, Linda Renton manages the Woolly Woofters association, to help animals in need around the world "We give of our time, we raise funds to pay for transport, food, treatments, spay" sums up Linda. Most of the funds collected come from the sale of creations made by the members of the association: knitted objects, paintings, and even plants of all kinds.

But the association generates little money, and supports several rescuers, particularly in Macedonia and Bosnia: " We can't cover all of Viktor's costs by all means, we don't cover anywhere near what he needs."

Feeling helpless, Linda is the one who contacted us in the first place to help Viktor: "I just don't know what the answer is in Macedonia. There won't have a shelter big enough to put all the dogs! Many thanks in advance for any help you can give to help the street dogs."

8. In Macedonia, stray dogs are subjected to atrocities, both from the state itself and from local people

This collection is organized by the French association Woolly Woofters . The 2 400 kg of kibble collected will be delivered to Viktor in Macedonia to feed the 150 dogs he cares for throughout the city.

Here is your quiz Pacino

Pacino is very skinny because he can't manage to eat enough!

Here is your quiz Rita

Rita is sick and is expecting babies!