This action succeeded, it has been delivered on the 27/06/2019, discover the delivery pictures. 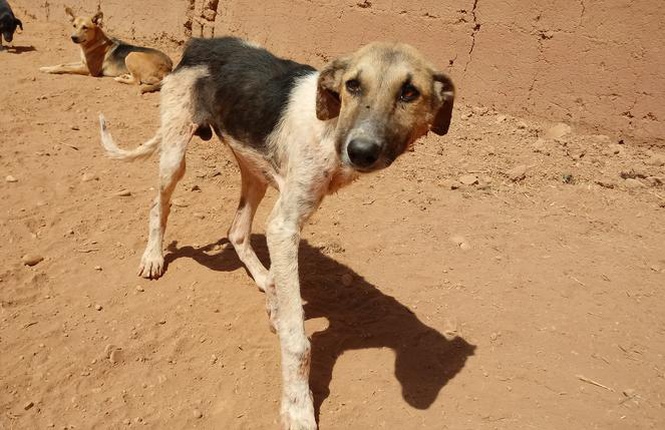 Picture taken by Animal Webaction on the saturday 8 june 2019

Picture taken by Animal Webaction on the saturday 8 june 2019

Michele has no more food for her shelter, 708 dogs will starve to death!

Following Michèle's SOS, we went to the shelter on June 8th.

There were only a few bags of kibble left then, which have since been consumed.

Michèle used to mix bread and water with the dry food to make it last longer, but this made the dogs sick, and cannot be done anymore !

Every day, nearly 200 kg of kibble must be provided to feed all the dogs.

Without subsidies or regular help from other associations, Michèle can no longer cope, she begs us to help her.

Rejected from all sides, these dogs have nowhere to go: the shelter is their only hope.

We want to help them, by sending 5000 kg of kibble as a matter of urgency.

1. The shelter is out of food for its 708 dogs: they will starve to death!

Following the SOS of Michèle, Founder of the shelter and the association, we went to the site on June 8th. The stock of kibbles we photographed at the shelter is already exhausted.

When we asked Michèle for a new stock status on June 17th, she informed us that all the kibbles had been consumed... "We're out of kibble. I don't really know what to do," she told us.

Last February, the Animal Webaction community got together to send 5000 kg of kibble to the shelter to save its hundreds of residents: we must help them again !

2. Michele can no longer mix dog food with bread and water as she used to, since it makes the dogs sick

For many months, Michèle managed to minimize expenses by mixing dry dog food with stale bread, bought at a lower cost, and barley flour (to limit diarrhea). Mixed with water, this combination allowed dogs to eat their fill, while limiting digestion issues.

But this mixture doesn't hold the heat, and makes the dogs sick! Michèle had to stop using this solution, and now needs to give dry food only...

The shelter now has to find 6 tons of kibbles every month, an unsustainable budget for Michèle, who begs us to help her.

3. Without food, dogs will start killing each other again

Last year, the shortage of food broke out even as dozens of new dogs were brought to the shelter every day. The fights were then daily and some had dramatic consequences: several dogs did not survive.

Not without difficulty, Michèle has managed to stabilize the situation, but if a new shortage rages, the fighting will resume. At the shelter, the dogs do not have a pen, but are kept in packs of 30 to 100 individuals: a small confrontation can very quickly become out of control

4. If we do not reach the target, dogs won't receive any food

We can take action, we have already booked a truck and pallets, but we have to pay it before June 25th.

5. Kicked off the streets overnight, these dogs owe their survival to Michèle only

The shelter was set up as an extreme emergency in April 2018, when local authorities in the region stopped tolerating street dogs. Bound to the association Le Coeur sur la patte by convention (Editor's note: originally established as part of a spaying/neutering program), the municipality of Agadir did not slaughter dogs like the adjoining municipalities.

However, as the dogs had to leave the streets, the commune hired agents to catch them and bring them to the association, leaving Michèle to deal with them on her own. The association, which at the time had only one dispensary that could accommodate 80 dogs, found itself with the load of more than 500 dogs in just 2 weeks, gradually reaching the 708 currently hosted....

"Thanks to the municipality of Agadir, we had begun a spaying and vaccination program to eradicate rabies and fight against canine overpopulation. This program unfortunately was interrupted, so we had 2 solutions : to either leave our dogs get killed, or to bring them back. And I asked for them to be brought back. That's why we had a dog tsunami, and that's why we ended up with a shelter of 750 dogs," said Michèle, founder of the association, last February.

6. The shelter does not even have running water: 1200 litres are needed every day

The land does not have running water, the water must be bought and delivered once every two weeks... Here again, a considerable budget, which increases with the hot season

Found in a hurry, the land that houses the shelter has an undeniable advantage, that of being able to accommodate all the dogs. But it is only a rental, which does not have any infrastructure adapted to the reception of so many dogs...

Michèle is desperate to find another field, but the constraints are strong, and she is unable to do so despite her extensive research.

Without running water, nearly 20,000 litres of water must be transported by truck every two weeks to supply the dogs with water!

Everything now lies on Michèle: "At the end of the month I don't know how to pay everything. What I did was a bit

For 15 months now, Michèle has been doing everything possible to feed and care for the dogs in the shelter, but has so far not been able to find any regular help.

While some international associations intervened last year for one-off assistance, the funding of the shelter on an ongoing basis is only possible thanks to the help of a few individuals, and the money invested by Michèle herself.

The subsidy provided by the municipality of Agadir for a while has ceased to exist, since the shelter left Agadir and stopped gathering new dogs. Everything now lies on Michèle: "At the end of the month I don't know how to pay everything. What I did was a bit crazy"

However, sterilisation programs have already been carried out in some Moroccan cities: unfortunately, they have so far always been abandoned, as their results take too long to be seen.

A situation encountered in Agadir itself, where the Trap Neuter Release program was ended by local authorities in April 2018, after 2 years of existence... Today, new programs have been launched, in Tanger for instance, but slaughter is still practiced in many places across the country.

9. No one wants these dogs: what will happen to them if the shelter can no longer feed them?

Dropped in this situation, Michèle faces it, but is aware that it is far from ideal: "I am not happy that my dogs are locked up, I am not happy that we do not have a land to settle them better, and I am not happy about what is happening in Agadir, that the dogs are captured, locked in bad conditions or killed," she explained during our visit.

But she is also aware that, as it stands, the shelter is the only option for all these dogs: still not tolerated on the streets, strays are slaughtered or locked up in bad conditions. Michèle must find kibbles to prevent them from this fate :

10. Michèle does the impossible for these dogs

Born in Morocco, Michèle has never been able to stand the poisoning and slaughter of street dogs across the country. In 2011, she founded the association Le Coeur sur la Patte. Its objective: to develop a spay and neuter program to contain the population of street dogs in Morocco. She started the program in Agadir in 2016, with more than 1000 dogs sterilized, vaccinated and released before April 2018.

Driven by the hope that the program could be resumed quickly following the slaughter order, she took the necessary steps to save as many dogs as she could in the meantime. "We have wonderful dogs in front of the door who are just waiting to live, we have no right to slaughter them," she said.

While 708 dogs are now accommodated at the shelter, she also hosts an additional 110 dogs as well as other animals in her home. A commitment that cost her her marriage, and occupies her entire life:

"Moroccan dogs are absolutely wonderful: you give them a piece of bread, they love you forever. I get up in the morning at 5:00, I start cleaning. I live barricaded, it's a lot of work. I love them and I get my energy from them, but I never get a second's rest."

11. Thanks to our platform in Morocco, we can take action rapidly !

If the collection is successful, the dry food will leave directly from our logistics center in Morocco. We can therefore act very quickly, and help Michèle and her 708 dogs to have kibbles!

This collection is organized by the association Le Coeur sur la Patte. The 5000 kilos of kibble collected will be delivered to Michèle to feed the 708 dogs hosted at the shelter.

Here is your quiz Lune

Lune's owner burned her eyes out with hydroalcoholic gel!

Here is your quiz Zouzou

Zouzou won't be able to get by without help!