SOS dogs from Serbia There are 0 kg missing to succeed

This campaign succeeded, it has been delivered on the 17/08/2019, discover the delivery pictures. 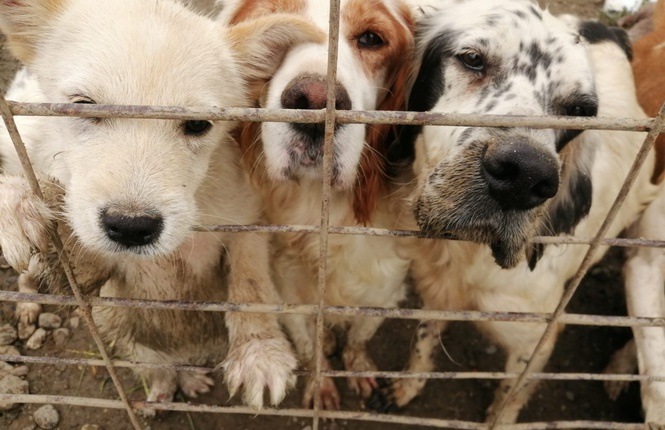 In Serbia, this shelter is out of kibble, its 103 dogs will starve to death!

Following an SOS we received we went on the spot on July 31, the same day a terrible tragedy occurred: 70 dogs were discovered, most of them died.

Danijela and Jovica no longer have any food to feed the survivors, they are desperate.

Overwhelmed by medical expenses, they beg us to help them.

Their shelter now hosts 103 dogs, many of them disabled or sick.

We would like to send 2400 kg of kibble as a matter of urgency.

1. About 70 dogs have just been found in critical condition, many of them have already died... Danijela is struggling to save the survivors but she has no kibbles to feed them!

On the very day of our visit, nearly 70 dogs were found following a report received by the association, in the mountains near the shelter. A very isolated and rocky area, without water or food, in which the dogs were deliberately abandoned.... "It's scary. So much sadness, so many dead ... Horror" sums up Danijela, who was very upset during our visit.

Danijela and many others are convinced that the private company, employed by the state to capture street dogs, is at the origin of this tragedy. Normally supposed to trap, neuter and vaccinate dogs before releasing them, the company's dogcatchers have always been suspected of killing dogs, with corruption as a background.

Danijela and Jovica are doing their best to keep them alive, and find places to host those they cannot accommodate, but they already had no kibbles before this tragedy, and they don't know how to get by !

2. Their condition is still critical, the coming weeks will be decisive for them, they need kibble

Subject to extreme deprivation and trauma, the survivors are all very weak and hungry, many of them only a few months old.

"Many of the survivors have not contracted any viruses so far, but they are all terrified, they scream as soon as we touch them. We have dewormed and treated them. Now we pray that everything is okay because they are going through a critical period, explains Danijela.

We must support them by sending kibble!

3. The kibble stock is already used up, Danijela and Jovica are frantic

At the end of July, the situation was already critical at the shelter: "Can you help us somehow, we have nearly no food left, we don't know what to do", Jovica told us on July 22.

We went there as quickly as possible, on July 31, to see there were only 120 kg of kibbles left at the shelter.

"We don't have much support, people think we're crazy for doing what we do. Only a small number of people are supporting and helping us. We alone cannot finance everything ourselves"

4. More than 100 dogs are hosted at the shelter, sick or disabled, none of them can survive without kibbles

Danijela and Jovica mainly rescue dogs affected by diseases or injuries, who can no longer stay on the street. Jovica takes particular care of handicapped dogs, and provides them with physical therapy, while Danijela focuses on sick dogs.

Still in care or recovering, all these dogs are vulnerable!

We can take action, we have already booked a truck and pallets, but we have to pay it before August 12th.

Having been in difficulty for several months, the association has never hosted so many dogs: there were only 76 dogs during our last collection in January...

Because they only rescue suffering dogs, they face very high medical costs: "We have a lot of debt for treating dogs, so this food issue is endless to us" Danijela explained.

7. They cannot count on the town hall, who already allocates a very small budget to the municipal pound

Overwhelmed, Danijela knocked on all doors, including that of the city's mayor: "After months of pleading, they helped witg 180 euros in all and for all," she explained.

This is not surprising, given that the budget allocated to the municipal pound is already extremely low: "They have that bad food, they have nothing but those bad granules that are pure corn and they don't have any medicine so I bring them. The granules are horrible to them, and big dogs have diarrhea from it, and puppies just." Danijela tells us.

In addition to the 103 dogs in her own shelter, she also provides food to the dogs in the pound, provides their medical care as soon as possible, and regularly takes care of taking the dogs out....

From France, the association Les Gloutons-garous does its utmost to support Danijela and Jovica in their fight. But it is not big enough to meet the needs of the 103 dogs welcomed!

"I sent a few kilos via my carrier, it's not much" said its president a few days ago, asking us to intervene as well. At Danijela's request, the association has been sharing for several months the adoptable dogs hosted at the shelter as much as it can, in the hope that the number of dogs hosted may decrease again....

9. Danijela and Jovica, ready to sacrifice everything for the dogs' survival 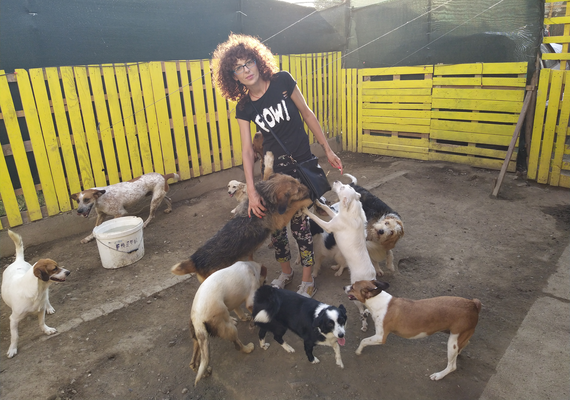 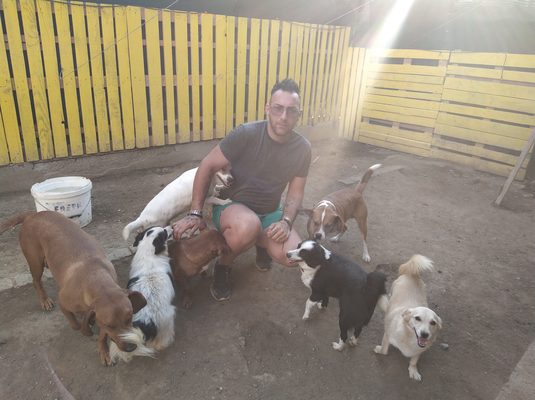 Both volunteers of the association, Danijela and Jovica are constantly juggling between their activities to take care of Kralejevo's dogs. President of the Spaske association for 6 years, Danijela is also a municipal employee, and a mother; Jovica has spent most of his time with Spaske's dogs for 3 years, which prevents him from having a stable job, and forces him to live at his parents' house.

"People here in Serbia don’t care about animals. They treat animals as if they were not living beings. That’s what hurts the most, we can’t do everything by ourselves. People here don't understand how important sterilisation is. For them is easier just to throw the dogs away and don't care what would happen with them
and who would take care of them.
"

10. In Serbia, 100,000 street dogs are hunted down by dogcatchers to be killed or trapped in mouroirs pounds

Receiving bonuses for each dog captured, dogcatchers hunt dogs relentlessly, and use extremely violent capture techniques. Many dogs are killed, the others end up crammed into mouroir pounds, without care or food.

This collection is organized by the Spaske association, chaired by Danijela. The 2400 kg of kibbles collected will be delivered to Daniela and Jovica to feed the 103 dogs of the shelter

Here is your quiz Ulke

Ulke can't see very well in one eye, and he's very fearful as a result...

Here is your quiz Charly

Charly was almost euthanized because she wasn't clean!