This campaign succeeded, it has been delivered on the 09/09/2019, discover the delivery pictures. 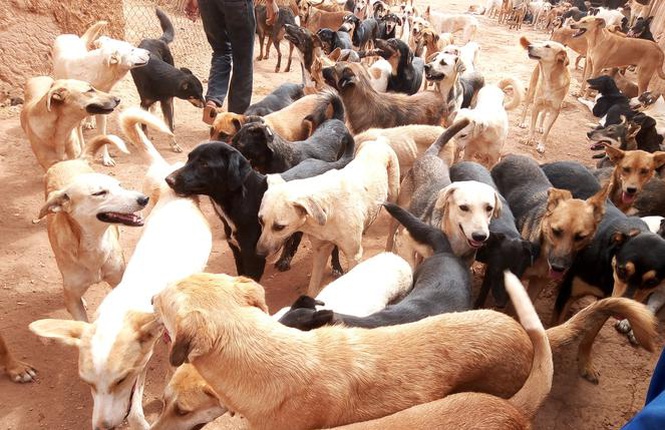 Picture taken by Animal Webaction on the thursday 29 august 2019

Picture taken by Animal Webaction on the thursday 29 august 2019

In Morocco, Michèle is out of kibble for her shelter of 730 dogs, they will starve to death!

Overwhelmed by the problems, Michèle asked us to help her urgently.

We were at the shelter on August 29th: the dogs are weak and exhausted, several have already died.

Without our intervention, the situation will worsen: there will be no kibbles left after September 11.

Without subsidies or regular help from other associations, Michèle can no longer cope, she begs us to help her.

Rejected from all sides, these dogs have nowhere to go: the shelter is their only hope.

We want to help them, by sending 5000 kg of kibble as a matter of urgency.

1. Lack of food, extreme drought and overcrowding are having devastating effects: several dogs have already died

The shelter currently hosts 730 dogs, in extremely difficult conditions. Michèle has been struggling to provide them with enough food and water for several weeks now.

We went to the site on August 29th: the dogs are weak and nervous, the situation is dramatic!

2. Without our intervention, the situation will worsen: the stock of kibble will be exhausted on September 11th, they will not survive it!

We went to the shelter on August 29th, following Michèle's SOS. Facing an apocalyptic summer, where problems keep coming up, she asks us to help her!

Every month, 6 tons of kibbles are needed to feed the 730 hungry dogs: a financial drain, impossible for Michèle to continuously honour. Weakened by an already existing lack of food, dogs also have to overcome extreme heat, promiscuity and, for some, disease.

3. The shelter is overloaded with puppies: diseases, vaccinations and neuterings deplete Michèle's resources

This summer, more than a dozen females gave birth at the shelter, a situation that is difficult to manage given the circumstances...

Spaying and neutering to avoid new litters, vaccinations to protect puppies from distemper and parvovirus that rage at the shelter: medical procedures are numerous and are a burden on the shelter's budget!

4. No volunteers, and employees that Michèle struggles to keep: the conditions are so difficult that no one wants to stay at the shelter to take care of the dogs

Michèle cannot count on any volunteers to take care of the dogs, and must therefore hire several employees to ensure the maintenance of the shelter and the care of the dogs. If the prospect of remuneration is more attractive, employees who show interest often stay for a short time: "It's difficult to find people who would like to stay: the conditions at the shelter are difficult, there's no convenience or facilities, it's very hot..." Michèle explains.

She has been looking for another land to transfer the shelter to for months, but the constraints imposed by more than 700 dogs and the lack of resources prevent her from doing so!

5. If we don't reach the target, dogs won't receive anything

We can take action, we have already booked a truck and pallets, but we have to pay it before September 08th.

6. Kicked off the streets overnight, these dogs owe their survival to Michèle only

The shelter was set up as an extreme emergency in April 2018, when local authorities in the region stopped tolerating street dogs. Bound to the association Le Coeur sur la patte by convention (Editor's note: originally established as part of a spaying/neutering program), the municipality of Agadir did not slaughter dogs like the adjoining municipalities.

However, as the dogs had to leave the streets, the commune hired agents to catch them and bring them to the association, leaving Michèle to deal with them on her own. The association, which at the time had only one dispensary that could accommodate 80 dogs, found itself with the load of more than 500 dogs in just 2 weeks, gradually reaching the 730 currently hosted....

"Thanks to the municipality of Agadir, we had begun a spaying and vaccination program to eradicate rabies and fight against canine overpopulation. This program unfortunately was interrupted, so we had 2 solutions : to either leave our dogs get killed, or to bring them back. And I asked for them to be brought back. That's why we had a dog tsunami, and that's why we ended up with a shelter of 750 dogs," said Michèle, founder of the association, last February.

For 1,5 year now, Michèle has been doing everything possible to feed and care for the dogs in the shelter, but has so far not been able to find any regular help.

While some international associations intervened last year for one-off assistance, the funding of the shelter on an ongoing basis is only possible thanks to the help of a few individuals, and the money invested by Michèle herself.

The subsidy provided by the municipality of Agadir for a while has ceased to exist, since the shelter left Agadir and stopped gathering new dogs. Everything now lies on Michèle: "At the end of the month I don't know how to pay everything. What I did was a bit crazy"

However, sterilisation programs have already been carried out in some Moroccan cities: unfortunately, they have so far always been abandoned, as their results take too long to be seen.

A situation encountered in Agadir itself, where the Trap Neuter Release program was ended by local authorities in April 2018, after 2 years of existence...

9. They all need our help

10. Michèle does the impossible for these dogs

Born in Morocco, Michèle has never been able to stand the poisoning and slaughter of street dogs across the country. In 2011, she founded the association Le Coeur sur la Patte. Its objective: to develop a spay and neuter program to contain the population of street dogs in Morocco. She started the program in Agadir in 2016, with more than 1000 dogs sterilized, vaccinated and released before April 2018.

Driven by the hope that the program could be resumed quickly following the slaughter order, she took the necessary steps to save as many dogs as she could in the meantime. "We have wonderful dogs in front of the door who are just waiting to live, we have no right to slaughter them," she said.

While 730  dogs are now accommodated at the shelter, she also hosts an additional 110 dogs as well as other animals in her home. A commitment that cost her her marriage, and occupies her entire life:

"Moroccan dogs are absolutely wonderful: you give them a piece of bread, they love you forever. I get up in the morning at 5:00, I start cleaning. I live barricaded, it's a lot of work. I love them and I get my energy from them, but I never get a second's rest."

This collection is organized by the association Le Coeur sur la Patte. The 5000 kilos of kibble collected will be delivered to Michèle to feed the 730 dogs hosted at the shelter.

Here is your quiz Câlinou

Câlinou lives outside when he's sick!