This campaign succeeded, it has been delivered on the 01/10/2019, discover the delivery pictures. 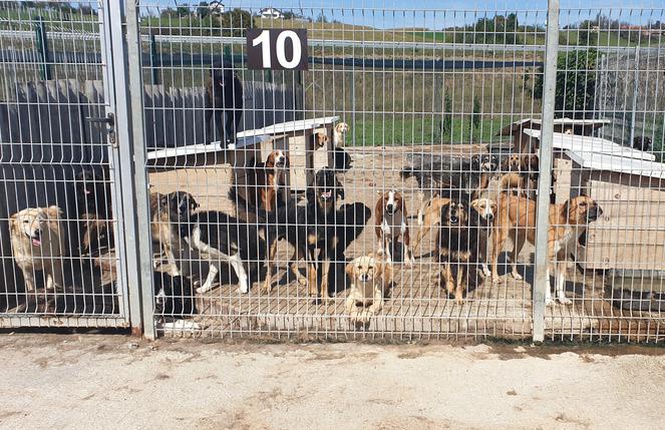 Picture taken by Animal Webaction on the saturday 14 september 2019

Picture taken by Animal Webaction on the saturday 14 september 2019

Animal Webaction visited the site 14 September 2019 and confirms the situation described below.

In Bosnia, this shelter has no more food for its 700 dogs, we want to save them!

We were there on September 13th, there was no kibble left.

Fights break out between the dogs, the situation is critical.

Calls for help are not working, Bojan's supporters have already done all they could.

Bojan is doing everything possible to avoid the worst, but external help is now vital.

We would like to send 4320 kg of kibble as a matter of urgency.

1. At the shelter, 700 dogs are out of kibble, the situation is desperate !

More than 700 dogs are now hosted at the shelter, and more than 6000 kg of kibbles are needed each month to feed them.

But the last kibbles were eaten on September 12, and Bojan has no way of ordering a new stock of food... "Often, due to food shortages, the dogs don't receive any food. If we don't have enough food to feed the dogs they become aggressive and fight againts each other" he explained during our visit.

Some individual donations allowed him to buy in small quantities following our visit in order to delay the worst, but the situation is critical and time is running out, the dogs need kibbles!

2. Suppliers refuse to deliver kibble because there are too many unpaid invoices

For months now, it has become impossible for Bojan to meet the cost of food, so he buys on credit. But debts are constantly accumulating, and Bojan is now facing a 5-month delay in payment, a situation that none of its suppliers can accept anymore !

"The things are very difficult since we run a massive shelter and the food costs exceed 6000 Euros a month. We really need all the help we can get. every new order means I have to make some payment for the old debt" Bojan explains.

3. Calls for help are not working, Bojan no longer knows how to get out of it

Online appeals, multiple calls for help on the social networks, Bojan has been fighting for months to solve the shelter's financial difficulties. But it isn't enough, neither to avoid having to buy on credit, nor to be able to repay it.

The debt is so high that it has become impossible to rectify the situation without external assistance, our intervention is crucial to allow the shelter to survive.

4. They need our help

We can take action, we have already booked a truck and pallets, but we have to pay it before September 27th.

6. Without the shelter, all these dogs are condemned to certain death

To put an end to euthanasia practiced in the pound, Bojan made an agreement with the town hall, and is now committed to ensuring the management of street dogs throughout the entire region. The shelter has therefore been confronted with a massive and continuous influx of dogs for months, whose reception he cannot refuse: "The amount of dogs has been steadily increasing over the last year. We receive up to 20 new dogs per month" Bojan explains.

The municipality provides only a very meagre financial contribution, which is not even sufficient to cover the rent it charges Bojan to occupy the land....

"I know that this shelter is not perfect place for the dogs. But, with so many abandonned dogs in the area, this place is their only home and only this place can save them from certain death" Bojan told us, eaten away by worry.

7. The association Mattie's Dream was on site in August, she asks us to help the shelter

From Belgium, the association Mattie's Dream supports the shelter to the maximum of its capacities. Help with the adoption of dogs, appeals for the benefit of the shelter, visits to bring medicines or equipment....

Its members were at the shelter just a few weeks ago, during the month of August, and remain impressed with Bojan's dedication: "Bojan does the impossible there to get everything done".

The association also supports several other shelters, and has only limited resources, they cannot do more at this stage for the shelter !

8. Bojan gives all his time and money to save the shelter, but that's not enough

First involved as a simple volunteer in the city's old pound, Bojan tried as best he could to soothe the daily lives of abandoned dogs, but without having control over the management carried out. Tormented by the terrible conditions in which the dogs were held, he fought to set up his own shelter, and to make it replace the pounds: a project that was both very ambitious and very difficult to carry out.

Despite his commitment to the shelter and the load it represents on a daily basis, Bojan also carries out missions in IT, which allows him to survive, and to support the shelter financially as much as possible. A very intense rhythm, totally exhausting, and which is no longer enough today to keep his project afloat:

"I started helping and feeding dogs in the old shelter in Prnjavor. I did this because I love dogs. Ever since I've been giving my best to provide the best care for the dogs. Together we can make this shelter a better home for hundreds of dogs"

9. In Bosnia, dogs are illegally tortured and killed

In 1995, when the war in Bosnia ended, the streets were full of stray dogs: the crisis and famine no longer allowed the inhabitants to support them... A dark period then began for the street dogs that had massively proliferated: harassment, torture and painfull mass slaughters became the daily lot of abandoned dogs.

In 2009, in order to stop such a massacre, the government enforced a law prohibiting the capture and murder of dogs in pounds without prior veterinary opinion.

While some people felt that this law tasted like victory, the lure of profit led some private pounds to charge the government for the purchase of phantom equipment.

Today, pounds catch, torture and kill stray dogs illegally in order to collect state subsidies. Corruption is not reported in the media, and private shelters try to save dogs that slip through the nets of illegal pounds...

This collection is organized by the association Mattie's Dream, for the benefit of Bojan's shelter. The 4320 kg of kibbles collected will be delivered to Bojan to feed the 700 dogs in the shelter.

Here is your quiz Pepere

Wounded on the leg, Pepere is at risk of losing it!

Here is your quiz Sephora

Sephora had babies too early, she is completely anemic!