SOS 120 Egyptian dogs There are 0 kg missing to succeed

This action succeeded, it has been delivered on the 07/10/2019, discover the delivery pictures.
Picture taken by Animal Webaction on the Sunday 22 September 2019 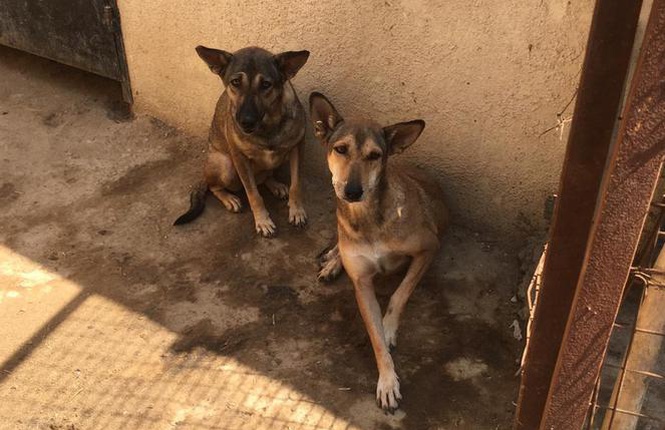 Picture taken by Animal Webaction on the sunday 22 september 2019

In Egypt, Heidi has no more kibbles for street dogs, what will happen to them?

Every day, Heidi receives new SOS for distressed street dogs, but she can no longer rescue them!

The kibble stock is completly used up, the 120 dogs at the shelter are already threatened by hunger.

No supplier is willing to deliver kibble anymore because the debts are too high.

Desperate, Heidi asked for our help: we were there on September 22nd.

We would like to send 2300 kg of kibble as a matter of urgency.

1. Without kibble, the shelter can no longer rescue street dogs, what will happen to them on the street?

The number of street dogs in distress has increased steadily in recent months, but Heidi is now unable to help them. Without food, the shelter is overwhelmed by a huge lack of resources, and can no longer provide for its 120 dogs.

"I hate feeling useless, I try hard. I receive calls every day, and messages that I don't even open anymore, I think each month I receive more than 30 cases. Five minutes ago, I received a message about this dog who gave birth to 10 puppies. Children have already killed 4 of the 10 puppies by throwing stones at them, people decided to kill or poison the mother" explained Heidi, terribly affected by this situation.

2. At the shelter, the kibble stock is all gone, the 120 dogs are in danger

Facing financial difficulties for several months now, Heidi had no choice but to buy on credit, until this solution also vanished.

Since then, she has been forced to buy old bread, which she mixes with a few carcasses when she manages to buy some. But these are only a small part of the meal brought to the dogs, and will soon be totally gone too!

Dogs are getting thinner and nervous, the weaker ones won't be able to last long at this rate.

3. Being in debt on all sides, Heidi no longer has any supplier who agrees to send her food

"The last two months, I couldn't cover all my expenses, and now I have great debt. The food and medicine suppliers don't want to deal with me before I pay" Heidi explained to us earlier this month, during our first exchanges.

The problem does not only affect dog food, Heidi can no longer buy carcasses or meat at low prices either, her debt being also high with the butcher...

Heidi spares no effort, and tries by all means to get help to keep the shelter afloat. "She strongly believes that she should do all she can to face and change the critical situation" summarizes our agent Cecilia.

But neither her SOS on the networks nor her online collections have worked so far, and the locals remain insensitive to the dogs' fate!

We can take action, we have already booked a truck and pallets, but we have to pay it before September 30th.

6. Resources are at their lowest, Heidi can no longer even pay for medical expenses

At the shelter, there are only a few dogs that do not require medical treatment upon arrival and/or during their stay. As Heidi has rescued many dogs since the beginning of the year, medical expenses have continued to increase, including spaying / neutering, which have burdened the shelter's budget.

This summer, an outbreak killed 7 puppies in just a few weeks, and many of the survivors are still on treatment today. "The vet used to visit the shelter twice per week for controls and treatments. Currently he only visits twice per month and for urgent cases I am taking the dogs by myself to any available vet" says Heidi.

7. To be at the shelter, Heidi had to give up her full-time job, she has few resources

Because she no longer had the resources to pay enough employees, Heidi was forced to leave her full-time job to take care of the animals herself. She now teaches part-time, and cares for the animals every morning at the shelter.

A change that, in addition to imposing a gruelling pace on her, implies a major reduction of her own resources, and prevents her from covering costs that she could previously have covered!

8. The association CatConnect asks us to help Heidi

President of the association CatConnect in the Netherlands, Irma is particularly affected by the situation of animals in Egypt, and has seen all the help Heidi gives them when visiting the shelter. She has also made the adoption of several cats from the shelter possible since last year.

But it is impossible for her to provide any financial support to the shelter. As her association is already fully committed to rescuing animals in Syria, which is exhausting all its own resources, she asks us to help Heidi.

9. Dedicated and determined, Heidi does everything to save Egyptian animals 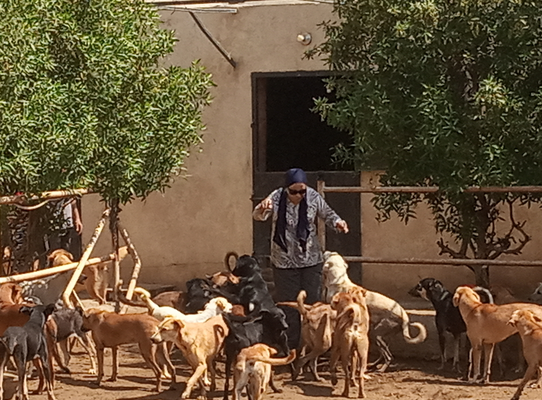 Touched by the animal welfare cause since her childhood, Heidi only fully invested herself in it after her divorce, and decided to found the shelter two years ago: "People are so cruel to animals that's why I started to save them and rehome them " she explains.

Heidi lives an hour from her shelter, so every day she has to face the journeys, the physical work of the shelter, her job as a teacher, and all the tasks related to managing the shelter, including fundraising...

If she keeps her head on her shoulders, she admits that she does not project herself too much into the future in order to have the strength to face everyday life.

11. In Egypt, street dogs are a nuisance that must be eliminated 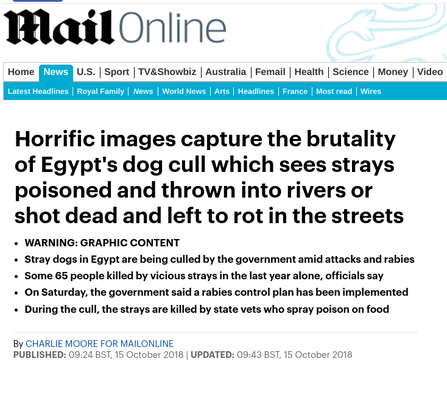 With an estimated street dog population of over 20 million, which has been growing for years, Egypt faces a major problem that it is unable to control.

In the absence of spaying / neutering programmes, mass killings are regularly carried out: the dogs are then slaughtered with guns or poisoned. A practice that has been well known and used for decades, including in other countries, but which is useless to contain the population of stray dogs or eradicate rabies...

This collection is organized by the association CatConnect, for the benefit of Heidi's shelter. The 2300 kg of kibble collected will be delivered to Heidi to feed the 120 dogs in the shelter.

Here is your quiz Nardia

Nardia was found on the street, emaciated and hungry...

Here is your quiz Câlinou

Elderly and sick, Câlinou's condition absolutely musn't go on to detoriate any further!