Tigrou There are 0 pouches missing to succeed

This action succeeded, it has been delivered on the 14/04/2020, discover the delivery pictures. 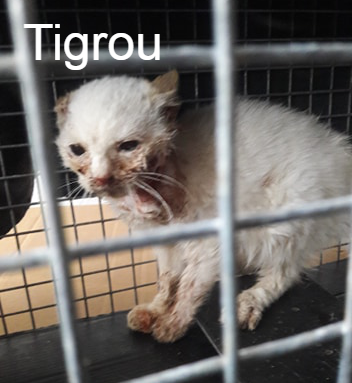 Tigrou refuses to eat, there is no wet food for him to start feeding himself again..

1. Bitten by another cat, Tigrou was seriously injured...

Tigrou is a cat of about 6 months old. We recently found him badly injured after being bitten by another cat on his neck and cheek.

We immediately took care of him and treated him. The abscess on his cheek is just beginning to heal, but we really thought he was going to die... The charity is keeping him in recovery for the moment, hoping to help him survive.

2. Injured, he is no longer feeding himself and is not growing either!

While Tigrou is already 6 months old, he is only the size of a 4 months old kitten! Because of his cheek abscess, which is still very painful, he can't chew kibbledry food. He is therefore dreadfully underweight.

3. Wet food would help him regain weight, unfortunately, we don't have any...

Since it is impossible for Tigrou to chew kibble, he can only eat wet food. This is the only nutritional source that could help him regain strength and allow him to be safe. Unfortunately, we don't have any to give him at all.

Without wet food, Tigrou will quickly run out of strength. He is already so skinny that he might actually starve to death!

4. The charity doesn't need money, just a few pouches of wet food to help Tigrou. Unfortunately they are impossible to find!

"Given the current circumstances, all our food collections in stores have been cancelled. We tried for a while to use our own funds to buy food for the 70 cats we feed, but we are running out of resources.

And even if we could find the financial means to buy food for them, the stores have been cleaned out! Our cats absolutely need food as soon as possible or they won't survive..."

5. The association fears this action will fail, it happens regularly on Animal Webaction.

Here is your quiz Emergency famine 750 dogs in Morocco

DISASTER! Due to the lockdown, the 750 dogs of this Moroccan shelter will starve to death!

Here is your quiz Rosie

Rosie has no strength left to feed the kittens.