Emergency famine Russia There are 0 kg missing to succeed

This campaign succeeded, it has been delivered on the 28/07/2020, discover the delivery pictures. 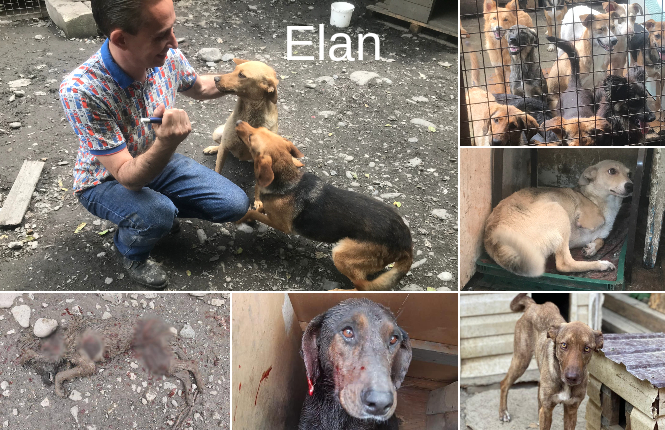 1. In Russia, there is not enough kibble left at Elan's shelter, the 315 dogs are killing each other! The strongest devour the weakest, several have already been killed... 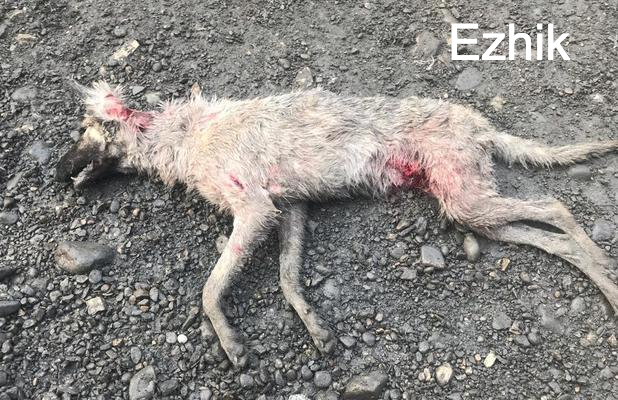 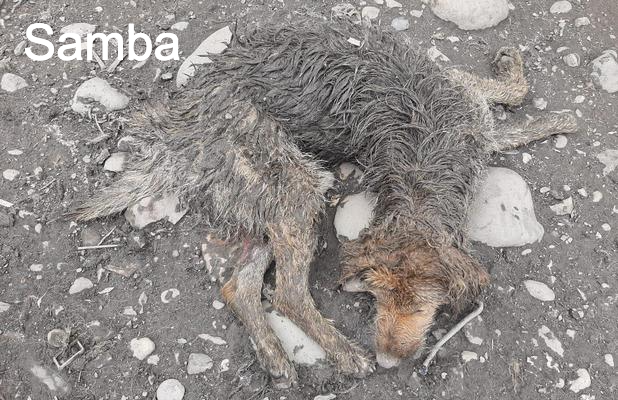 "Little Ajinka died at the of shelter a few days ago... She was eaten by the other dogs who died of hunger at the shelter, it's a terrible tragedy.

Dogs live in packs, fights are common at the shelter... When food runs out, as it is the case right now, dogs fight for their survival, it's a natural phenomenon. Ezhi and Samba died last month, this month it was little Ajinka...

If I don't find food soon, we won't have a choice but to close the shelter, we can't let our dogs continue to fight each other to death!! It's a disaster."

2. If we move quickly, we may be able to save the remaining 315 dogs by sending them some kibble. But if no one takes action, they will die too! 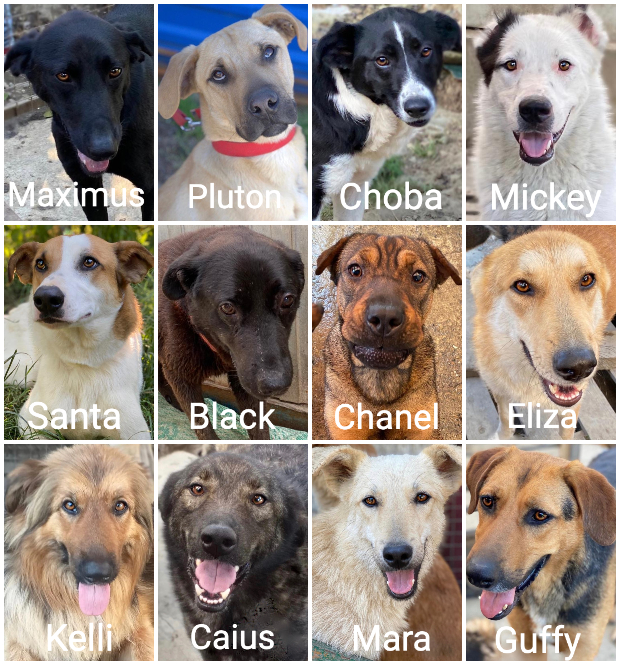 "There's a total of 315 dogs cared for at the shelter, spread into two locations. Before the pandemic, the donation were already scarce, but now it’s almost nothing. There is a charity box in one of the hospitals collecting money for the shelter. Since January only 47 euros have been collected...

The other animal activists and I are using all our resources to run the shelter. I'm completely broke, I've already got several loans, I have no money left. The animals are treated on credit...

Some food is donated but it's not enough food for such a great number of dogs. At the moment we have food for 4 days, but what’s next? Every day we struggle with malnutrition. I fear that we won’t be able to feed the dogs anymore..."

3. The shelter is overcrowded, without a new stock of kibble, Elan will have to close it down! The dogs will have to return live on the street! 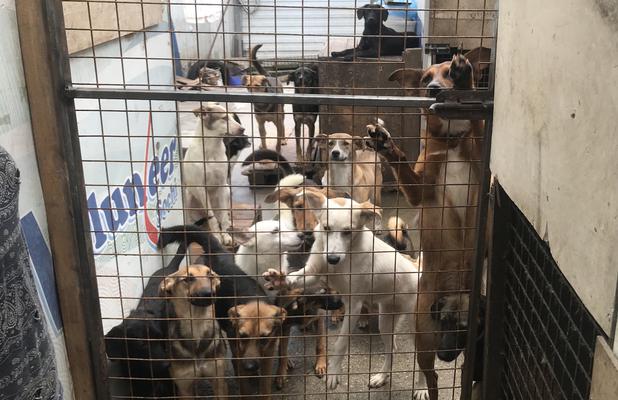 "There are already so many dogs in our shelter and lately, adoptions have really slowed down. Since May 1st, 40 new dogs have arrived to the shelter - only 22 have been adopted. The number of dogs is increasing all the time. To put things back in perspective, when the shelter opened 5 years ago, there were only 65 dogs...now we're at 315.

Unfortunately we don't have enough space to host every street dog in Sochi. For this reason, we only rescue sick and starving animals, which are likely to die without our help.

Even with these "containment methods", it is very difficult to find food for so many dogs. When I have enough stock, I also feed stray dogs in the streets. However, right now, this is completely impossible..."

4. Found tied to a pole and severely malnourished, Lena will probably be one of the next ones to die if no kibble is found! 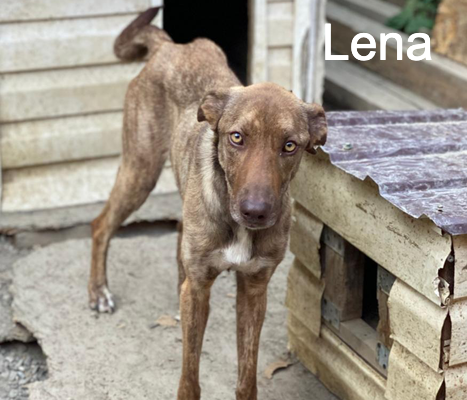 "Lena a.k.a "Lenochka" is a 3-year-old female dog. We found her in one of Sochi's central streets. She was tied to a post and was extremely skinny. She had almost starved to death...

She is gaining weight little by little but she's still very thin and needs healthy and abondant food. Without kibble, she won't make it."

5. Elan's business has gone bankrupt because of the sanitary crisis. Completely indebted, he can no longer afford to buy kibble to save his dogs! 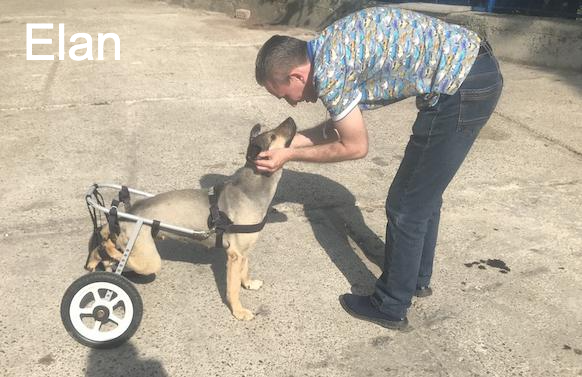 "We're a private shelter, run by animal enthusiasts, no organization or company is helping us. The government is not helping either, there are no effective animal protection laws in Russia, and no public animal shelters in Sochi... The administration does nothing.

The pandemic has been a catastrophe for me. I can't work and I've lost all my money... Banks refuse to lend me more money.

We have debts all over, especially at the vet's... it's very expensive to vaccinate, neuter or treat for blood-sucking insects and intestinal worms, to say nothing of surgeries - the situation is desperate!"

6. Elan isn't asking for money, only kibble to keep his dogs from starving! 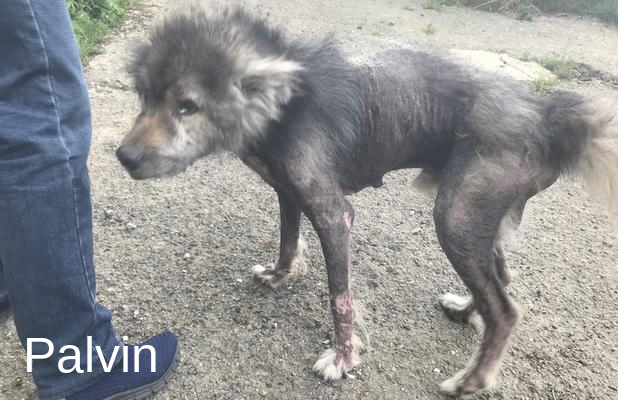 "I've never been indifferent to animals' fate, even as a kid, I was taking care of them. But I had never realized until a few years ago, the scale of the problem with stray dogs.

I've started helping out at the shelter 4 years ago, with medicine, organizational and transport issues. Now I can definitely say that the shelter has changed me, it is an irreversible process, like a state of mind.

Each time I see a wounded animal injured by human actions, I feel pain and resentment. These feelings are so deep that they make me cry."

7. If this campaign is successful, Elan will not receive any money but 4320 kg of kibble will be delivered to them from the Animal Webaction logistic platform in Russia. 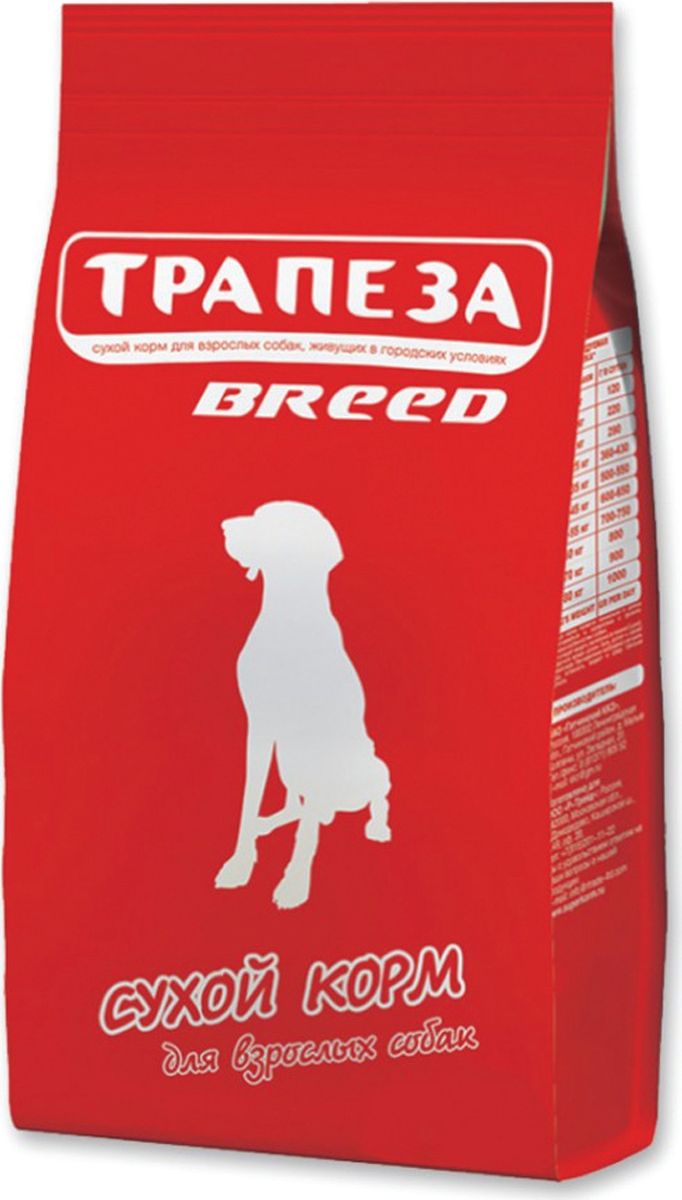 Animal Webaction has a logistic platform in Russia, still active despite the confinement, which allows us to intervene quickly and deliver kibbles.

8. Elan can count on the support of a few faithful supporters but they have already done their maximum! 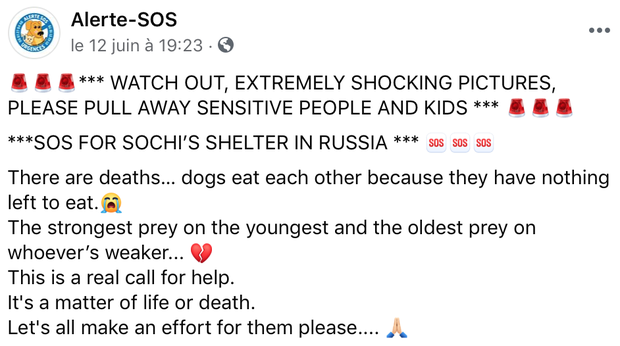 "I think that people who help animals in Sochi are mostly poor, and some have lost their job due to the pandemic. They give what they can, but it is like a drop in the ocean for the shelter, it’s not enough.

Fellow animal lovers are in similar position and have no money to help either. We’ve almost never been helped by organizations, one company allocated 130 euros once, the other company brought us dog food once, and this is it.

My friends don’t support me. They just don’t understand my passion... We have dogs fighting each other to death right now over the lack of food. I feel helpless!"

10. In Russia, donors are scarce, and there are no foundations or subsidies. It is very difficult to find funding for kibbles, many dogs remain starving on the street! 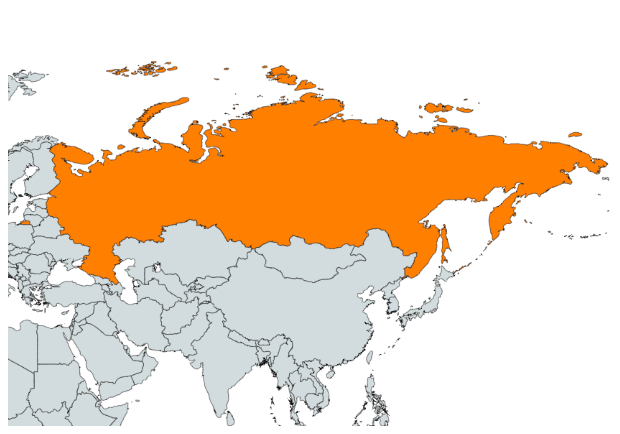 If you know of a foundation or NGO that could help Elan, please invite them to contact us so that we can put them in touch.

If you represent an animal protection foundation or NGO, please help Elan's dogs, contact us and we will put you in touch!

If you want to come to Elan's shelter to help her or if you want to send her directly some kibbles or a check, contact Elan via Facebook (note: direct help is under your own responsibility).

11. If you make a purchase on Animal Webaction, it will be protected by our guarantees

Here is your quiz Ruben

Because of a serious virus, old Ruben can no longer eat...

Here is your quiz Chipie

Since she has been in contact with caterpillars, Chipie has had a lot of trouble eating...