Rescue 210 dogs Morocco There are 0 kg missing to succeed

This campaign succeeded, it has been delivered on the 23/10/2020, discover the delivery pictures. 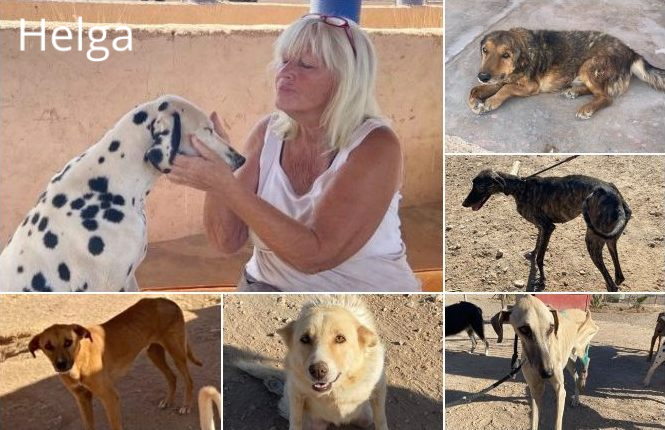 1. In Morocco, the 210 dogs at Helga's shelter don't eat their fill for lack of kibble, they might starve! 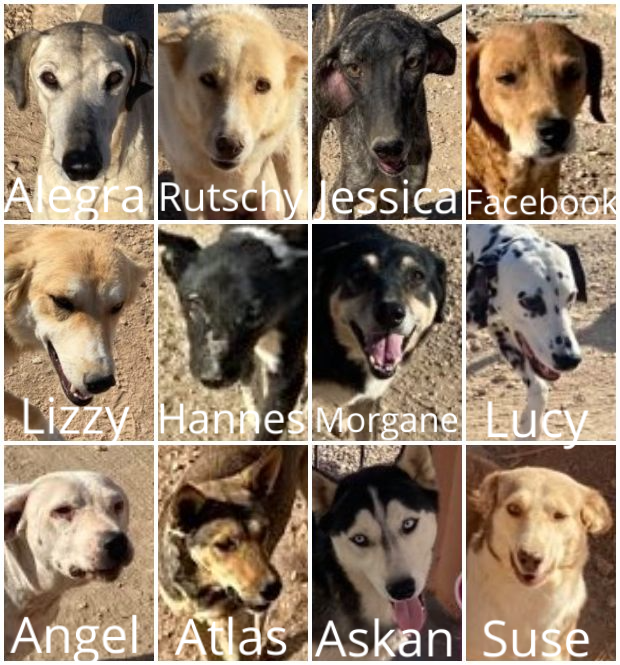 "With the pandemic, stray dogs have suffered enormously from hunger, there have been many fights, but also many accidents when the lockdown was lifted. We have managed to take in quite a few animals, some rescued from the street, others brought to us, but at least we are doing our best to ensure that there are as few dogs left on the street as possible.

I have more than 200 dogs here at the shelter, normally I need more than 100 kg of dry food per day, something I absolutely can't afford. I give them food, yes, but they don't eat their fill at all. I also try to give a bit more to the dogs who are fragile and in a precarious state because they need it more...

I have less than 400 kg left to this day. My concern is to have to give them bread that is not made for them. This is already the case from time to time, we mix bread with kibbles because they are too hungry otherwise. It is not to feed them in fact but just to calm their hunger, because bread is not nourishing. I try to do my best and to stay optimistic, but it's very difficult".

2. Without kibbles, Helga will no longer be able to take in helpless dogs, they will remain to die on the street. 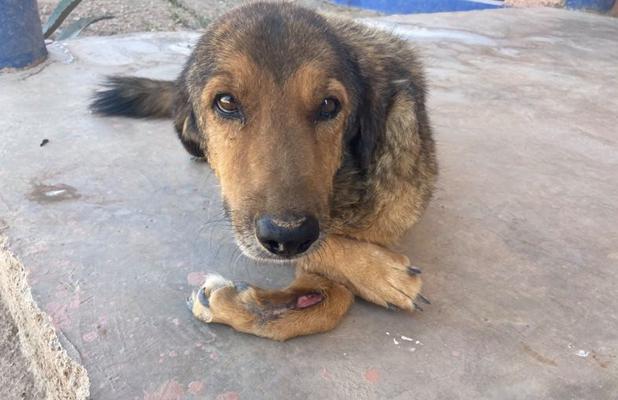 "Without kibble, I won't be able to care for other dogs, whereas I very often receive abandoned and sick dogs, sometimes left right in front of my door...

And so I think it is vital that we can continue not only for these poor dogs but also to prevent the dangers that can happen if these dogs remain wandering without shelter, without food, without medical care.

It is important to have associations like ours, if only to minimise the problem of rabies as much as possible, because the fewer stray dogs there are the less rabies there will be, which is a very big problem here and a danger for everyone.

So far we have done almost everything on our own, but we could really use a little help."

3. Twiggy was brought to the shelter shortly before our visit, in a terrible shape. The shelter is his only chance of survival, but it is compromised by the lack of kibble. 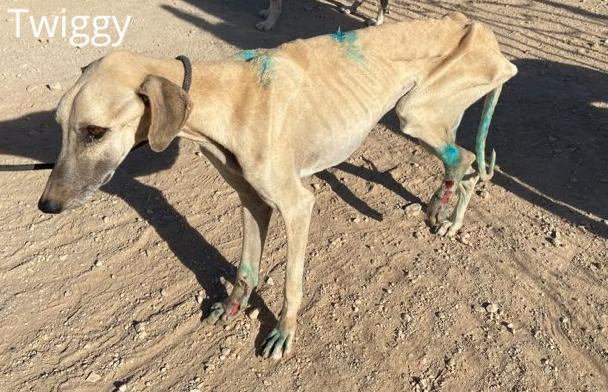 "Twiggy was brought to us here at the shelter three days ago by a gentleman who said he had found him like this. He is in a terrible state... He is skeletal, and has three sick legs, X-rays are already scheduled.

At the moment he is in pain and has difficulty eating. He is very sad, stays in his little corner, doesn't play and doesn't bark either. Once under treatment, he will absolutely need good food to hopefully recover".

4. Helga has used up all her savings, sold some of her belongings and taken out loans for the survival of the animals. She can no longer buy kibble and needs our help. 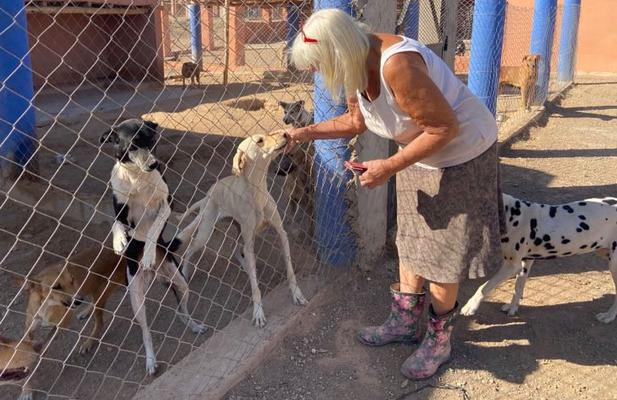 "Indeed, it's harder because we are short of funds, donations have dropped enormously as soon as the crisis began, which I understand. Many people have lost their jobs, and need their money to live and feed their families, it's quite normal.

But it has also had an impact on us, I found myself forced to take out a loan with a supplier, which I haven't repaid to date. I don't only have dogs at the shelter, I also have other animals, so I have other responsibilities, so it's not easy, especially when there aren't many of us doing this. It's just me and my son.

I can't buy kibbles at the moment because I have to finish my credit, I have expenses on the side too: the clinic and the vet, water and electricity etc... I'm sure that I am doing my best to feed my dogs, I've already sold my car some time ago, I won't give up, but the food can't wait".

5. Helga is not asking for money, only kibble to keep her dogs from starving. 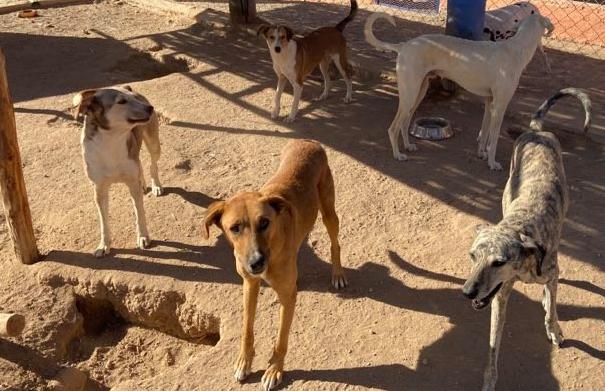 "I have been taking in animals since I was a child. I had a shelter in Germany, it was a bit easier there, adoptions were easy, not like here in Morocco. I've been in Morocco for more than 30 years now, I decided to settle here because I loved this country and above all because I saw that the situation of the animals here was catastrophic, and I continued to do what I'm supposed to do, which is to help the animals.

It's frustrating, it pains me not to be able to feed them properly. So far we've been able to get by pretty much thanks to our supplier who gave us credit so that they don't starve, but the poor dogs don't eat enough.

It's like having a child and walking past a candy shop and telling you that he wants this and that and that and that's not possible, it's the same with dogs, I give them food and they look at me and with their eyes they say: give me some more. It's sad to tell the truth, it hurts me to see them like that."

6. If this campaign succeeds, Helga will not receive any money but 2500 kg of kibble, delivered from the Animal Webaction logistic platform in Morocco. 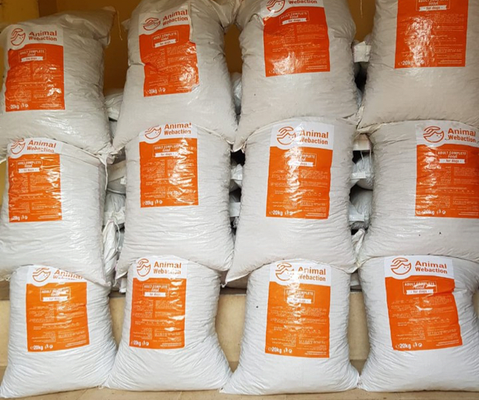 Animal Webaction has a logistic platform in Morocco, still active despite the confinement, which allows us to intervene quickly and deliver kibbles.

"I don't have any subsidies, here in Morocco it doesn't work. In Germany, where I come from, I have done my best but so far I have received nothing.

I have contacted organisations, but most of them don't take care of food because it is not "visible" according to them, so for food it is always difficult. The biggest problem is that most of the organisations don't reply to me, and if they do, they tell me that they prefer to help other European countries mainly, but not Morocco, I don't understand, and this has been going on for years.

Even if I have promises from people who come to see me, most of them, as soon as they walk through the door they forget everything and I don't get anything, so I have to do everything myself, and manage for food".

9. In Morocco, donors are scarce, and there are no foundations or subsidies . It is very difficult to find funding for kibbles, many dogs remain starving on the street! 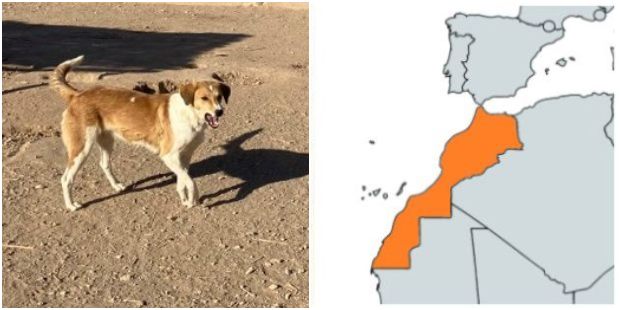 If you know of a foundation or NGO that could help Helga, please invite them to contact us so that we can put them in touch.

If you represent an animal protection foundation or NGO, please help Helga's dogs, contact us and we will put you in touch!

If you would like to visit Helga's shelter, send her food or a cheque directly, please contact her via her association's Facebook page (note: you are entirely responsible for direct aid).

10. If you make a purchase on Animal Webaction, it will be protected by our guarantees.​​​​​

Here is your quiz Dakota

Little Dakota is suffering from severe breathing problems that are ruining his life...

Here is your quiz Clochette

Ever since she was hung from a fence, Clochette has been traumatized!