Rescue 186 dogs Morocco There are 0 kg missing to succeed

This campaign succeeded, it has been delivered on the 25/02/2021, discover the delivery pictures. 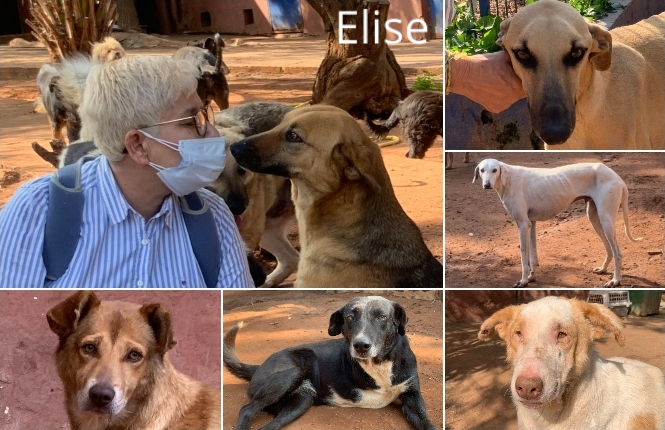 1. In Morocco, Elise has almost no kibble left for the 186 dogs at the UMPA shelter. They no longer eat their fill, several have already died in recent weeks! 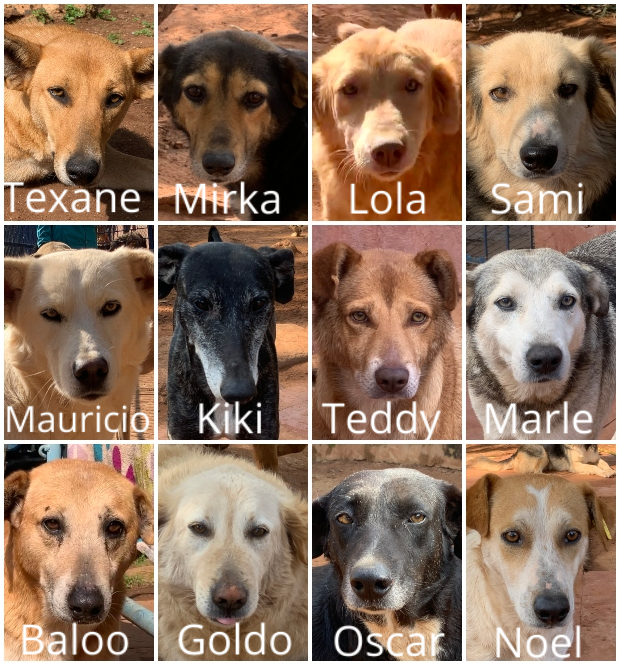 "The situation in my shelter is getting worse every day, we have a lot of charges, and we have had far fewer resources for months now. I used to buy kibbles with my own money, but I can no longer manage without help.

The dogs don't eat enough, even the weakest ones. They catch infections more often, many of them have already relapsed in the face of diseases that they were able to fight off, several passed away: I have lost 15 dogs in the last two weeks. I don't want to lose any other.

I won't have any kibble left by the end of the month, and it will be even worse. I am tired, feeling down and stressed for the future of my shelter, I am afraid that these dogs might die of hunger or infection. I need this campaign to succeed, it's my only hope to feed them".

2. Fights break out, dominant dogs attack the weaker ones: they need kibble to prevent the situation from getting out of hand. 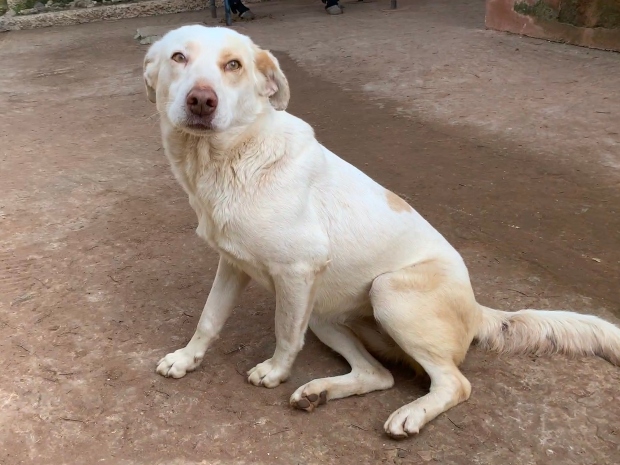 "The shelter is overcrowded, I have more than 180 dogs here, they fight and have a dominant behaviour. There are several abandoned dogs that I can't save, I currently only rescue those in extreme emergencies, the situation is too precarious.

Being an abandoned animal is horrible enough in itself, but being one in Morocco is just awful. The situation is catastrophic for those animals outside, but if nothing changes in the near future, I won't be able to help any more of them, I get depressed just thinking about it.

I have been involved with the UMPA since 1995, 25 years of hard work, I have thrown myself body and soul into this adventure, I have invested all my physical and moral energy in it. Even today, even though I am ill, I am fighting to run this shelter, to try to offer a better life to these dogs".

3. Rescued from the street, where he was wasting away from a severe form of scabies, Carlos keeps relapsing. Elise fears that he will not survive without kibble. 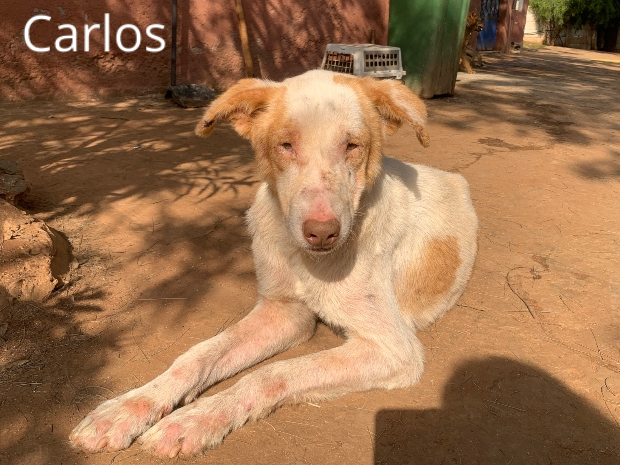 "Carlos is a street dog who was brought to us because he was suffering from purulent scabies and was very weak. He is 7 years old now, I have been treating him since he arrived about two years ago, but he keeps relapsing.

I am afraid that with malnutrition, this recurrent scabies will cause him much more serious complications this time, which could lead to his death".

4. Because of the pandemic, the association only received half of its subsidies in 2020, and may not receive any of it in 2021. Elise is funding what she can with her retirement pension, but it's not enough, she can't buy kibbles anymore. 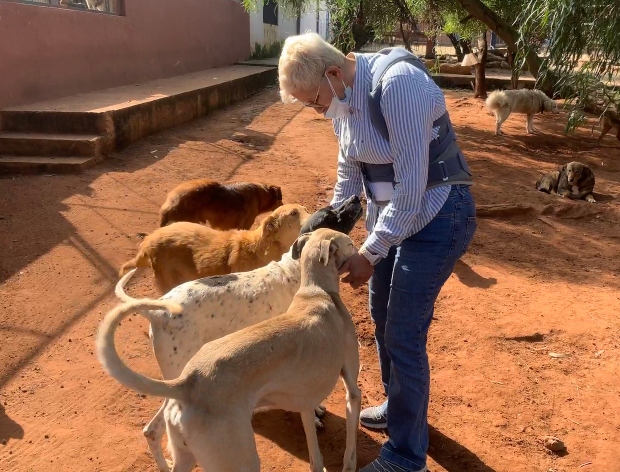 "Our association is officially of public utility, and we normally receive a grant from the Ministry for our actions. But unfortunately, we only received half of this subsidy in 2020, and I don't know yet whether we will be able to benefit from even part of it in 2021.

The association's actions at present are therefore financed by my retirement and my husband's money. Donations have been decreasing since the beginning of the pandemic, they exist but represent a contribution that is far too meagre for all the shelter's expenses.

We no longer have the means to take care of everything: food, medicines, care, operations etc...  And we already have slates at the vet's, as well as debts for medicines".

5. Elise is not asking to receive any money, only kibbles to keep the dogs from starving. 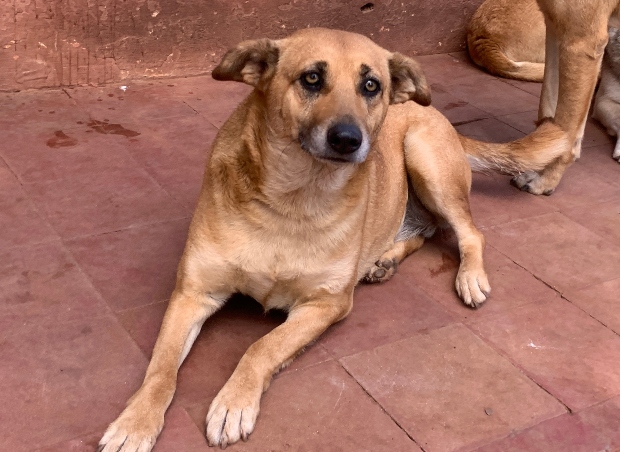 "Our job is to receive abandoned animals, treat their wounds or illnesses, feed them, take care of them and look for foster families and adopters for them. Our job is to give them a better life.

In addition to the shelter, we also provide free care for the animals of the most destitute people. In 2020, we have cared for 2400 of them, and the demand is constantly increasing, because the poorest people don't even have enough to look after themselves.

If the UMPA project could no longer continue, what would become of all these animals?  The ones in the shelter, the ones we keep taking in all the time, the ones we take care of for the most destitute?"

6. If this campaign succeeds, Elise will not receive any money but 3500 kg of kibbles, delivered from Animal Webaction's logistics platform in Morocco. 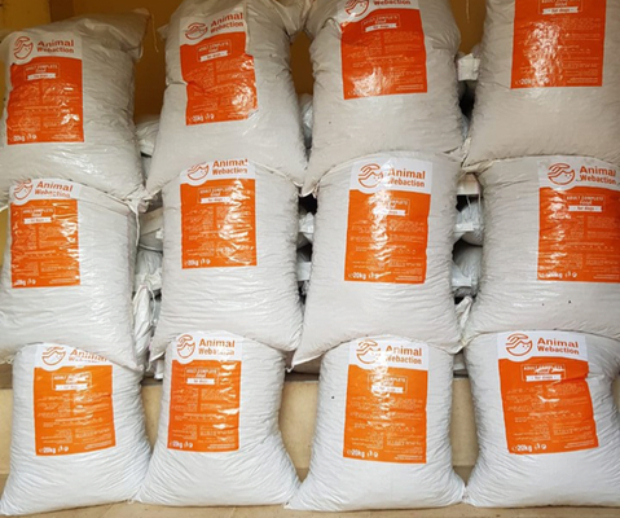 Animal Webaction has a logistics platform in Morocco which enables us to intervene quickly and deliver kibbles.

7. Fundraisings organised by the association are no longer working, Elise doesn't know how to get out of it and is counting on this campaign.

"I am knocking on all doors, I am also making online fundraisings, but they don't work like they used to. Since the beginning of the pandemic, it's been much more difficult because fundraising doesn't work well.

The year 2020 has been extremely difficult, between the loss of half our grant, and the drop in donations, I don't know what we would have done without the help of Animal Webaction. This year looks the same, or even worse, we still need you, to hold on and be able to breathe again".

When a campaign fails, Animal Webaction cannot deliver the collected products, the beneficiary receives nothing and the buyers get a refund.

9. In Morocco, donors are scarce, and there are no foundations or subsidies . It is very difficult to find funding for kibbles, many dogs remain starving in the street! 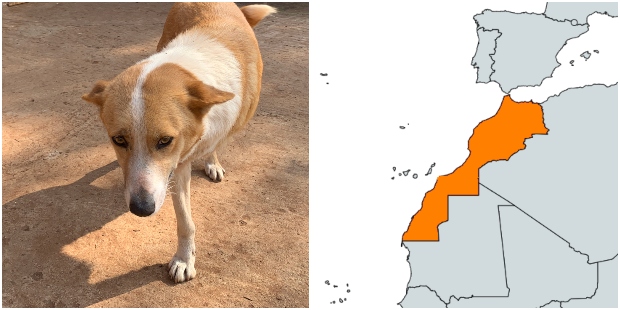 If you know of a foundation or NGO that could help Elise, please invite them to contact us so that we can put them in touch.

If you represent an animal protection foundation or NGO, please help Elise's dogs, contact us and we will put you in touch!

If you want to come to Elise's shelter or if you want to send them directly some kibbles or a check, contact her on Facebook (note: direct help is under your own responsibility).

Here is your quiz Keiko

Breast tumors, tooth problems... Keiko is struggling and will need help to get back on track!

Here is your quiz Sega

Poor Sega had an open fracture when she was found!