This campaign succeeded, it has been delivered on the 14/05/2019, discover the delivery pictures. 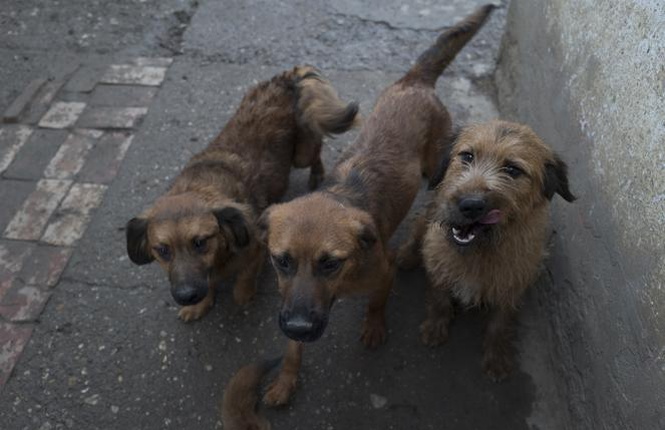 Jelena's shelter is out of food, the dogs don't eat every day!

In Serbia, Jelena's shelter houses 28 dogs, for whom she can no longer get food.

We were at the shelter on April 27th, there was nearly nothing left, the dogs didn't eat anything the day after...

Under rations, dogs are nervous and aggressive, fights break out : the most fragile ones cannot cope with it.

Jelena works 12 hours a day to support the shelter, but without success.

Alone at the shelter, her mother Dragoslava struggles to control the situation: she is exhausted and overwhelmed.

Despite multiple pleas for help, no foundation is getting involved, the situation seems inextricable.

We want to help them by sending 2000kg of kibble as a matter of urgency.

1. The shelter no longer has any kibble, the dogs do not eat every day.... Fights break out between the dogs due to hunger.

Last October, the Animal Webaction community got together to donate 1400 kg of kibble to the Jelena' s shelter, but this stock got to an end several months ago!

"They struggle constantly to raise funds for food and on several occasions they have had to ration the food to make it last" said Marie, who is trying to help the shelter from England, when she called us for help.

The lack of food makes the dogs nervous, and leads to fights that Jelena and her mother try to prevent as best they can "Some of dogs want to have fight with others , especialy those rescued From public shelters where they had to fight for food" tells us Jelena, President of the association

2. The shelter hosts many sick dogs, the lack of food is even more terrible to endure for them

Jelena's shelter can only accommodate very few dogs, which is why it only caters for the most vulnerable, whose chances of survival on the street or in impoundments are close to zero.

One third of the shelter's residents suffer from chronic diseases, unhealed conditions, or irreversible damage due to previous traumas. Malnutrition, but also the great stress caused by the lack of kibble, is already putting them at risk.

3. Due to lack of resources, boarding hasn't been paid for several months: 18 dogs are at risk of ending up on the street

Because the space at the shelter is too limited, and the fences do not allow large dogs to be safely housed, Jelena has no choice but to pay pensions for 18 other dogs under her protection.

This represents an enormous budget, which her resources do not allow her to honour: the pension has not been paid for several months, Jelena must honour her debt under penalty of seeing these dogs put back on the street.

Her dilemma is extremely cruel: the few bags of kibble she manages to buy in a few drops are taking her further away from paying off her debt every day...

4. Running water is contaminated throughout the city and is no longer drinkable: 60 litres must be purchased every day!

In recent months, running water has been declared contaminated throughout the city, forcing its inhabitants to get bottled water to meet their needs.

A major change for the shelter, which uses 60 litres of drinking water every day outside of the hot season, for a monthly budget of 600€ for this alone.

Despite a higher education as a chemist, Jelena spent nearly 4 years at the shelter night and day, trying to sell soaps made by her to keep the shelter alive.

But with nearly 50 dogs in charge of the association, including about twenty in boarding school, and about ten with chronic veterinary expenses, the costs have become too high.

"I could not sell enough soaps for that so I decided to find job.  My salary Is not big , just 150€ for month .... That came with lot of changes: I work From 10 to 22h every day - on friday and saturday until midnight. I can't Help mom as much with the remain time. I go to shelter after work with wish to Help her but i only end up sleeping because I am tired" Jelena says with regret.

6. In Jelena's absence, her mother Dragoslava has to take care of the shelter. Physically exhausted, she is also extremely anxious due to a lack of kibble

Because it is impossible for Jelena to hire anyone in the shelter, and no volunteers are involved, Dragoslava is now forced to replace her at the shelter.

Maintenance, dog care, supervision to avoid fights etc.... Dragoslava works all day at the shelter, and also spends most of her nights there. "It's hard for her. She sleep just 3-4 daily , most of things are on Her backs.  She Is tired . She also has troubles with spine and work alone in shelter does not help her" Jelena tells us sadly.

7. Their calls for help remain unanswered, Jelena and Dragoslava are desperate

"I did what I could , I have sent thousands of e mails, beging for help, any help. I did not had success with online pages, with organisations around world, with searching help in Serbia. There was allways No as answer. I tried anything, gave my money for my own medical treatment to reduce little but debt, I tried to sell some of my personal things, like clothes, but nothing was enough" Jelena said some time ago, running on empty.

8. If we don't reach the target, dogs won't receive any food

We can come into action, we have already booked a truck and pallets, but we have to pay it before May 12th.

9. Blocked rooms, fences to be rebuilt: to avoid boarding costs, many works would be necessary at the shelter, but cannot be financed

The dogs of the shelter are housed on a partially restored property: half of the house is still unhealthy, and cannot be renovated due to lack of resources.

For the same reason, the external fence cannot be redone, and represents too much of a risk for large dogs, who can easily jump over it.

The only way to protect the dogs is therefore to place them in boarding, while waiting to carry out work or find another site: again a vicious circle and a terrible dilemma for Jelena and her mother.

The house occupied by the dogs is located in a residential area, very close to the other houses. The neighbours consider the shelter as a nuisance, and want to make Jelena leave.

Several dogs were attacked and injured through the gate, one of them died after eating poisoned food. Since then, Jelena and her mother have taken turns to ensure a permanent presence at the shelter, and prevent further incidents.

11. We want to help them get through it

12. Jelena rhythms her whole life for the shelter

For 4 years, Jelena invested herself body and soul in her association, created in Lina's honour: a street dog rescued by Jelena, who died shortly afterwards.

Forced to accept a full-time job a few months ago for the good of the dogs, she is constantly torn between her professional obligations and those of the shelter, and has only a very limited personal life: "Dogs now have just mom ,but I hope that in some near future that will change , I miss them and I know that shelter need one more person . Mom can't do all alone. I won't have kids or have need for anything like that , dogs are my kids so investing in their future sound good."

13. In Serbia, 100,000 street dogs are hunted down by dogcatchers to be killed or trapped in mouroirs pounds

Receiving bonuses for each dog captured, dogcatchers hunt dogs relentlessly, and use extremely violent capture techniques. Many dogs are killed, the others end up crammed into mouroir pounds, without care or food.

This collection is organized for the association Lina's animal rescue. The 2000 kg of food collected will be delivered to Jelena and her mother Dragoslava to feed the 28 dogs hosted at the shelter.

Here is your quiz Katie

Here is your quiz Mélèze

Left without food or water, Mélèze was in danger!